A helicopter that was carrying three rescue workers going to help flood victims, has crashed into a hill. 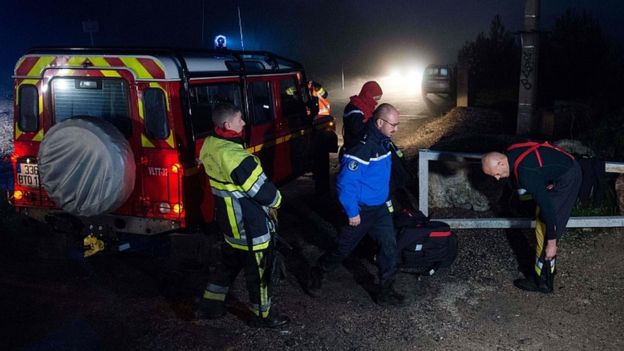 Emergency teams sealed off the crash site at Rove, near Marseille

According to the BBC, three rescue workers on a mission to help people caught in floods in southern France were killed when their helicopter crashed near Marseille.

The EC145 aircraft had been on a rescue and reconnaissance flight in the Var region on Sunday night when contact with it was lost, officials said.

The crashed helicopter and the three crew members were found near the town of Rove. An investigation is underway.

Heavy rain in south-east France has led to severe flooding and several deaths.

In a statement, Interior Minister Christophe Castaner and his deputy, Laurent Nuñez, described the three victims as “everyday heroes who gave their lives to protect the French.”

The crash site in hills north of Marseille has been sealed off as police and investigators combed the scene, French media reported.

Sources close to the investigation said poor visibility caused by fog could have been a factor.

At least six people have died in floods in south-eastern France in recent weeks.

On Sunday a shepherd in the Var region was swept away as he tried to cross a swollen stream in his vehicle while tending to his flock. His body was later found in the 4×4 further downstream.