Drama As Arsenal's Aubameyang Rushes To The Toilet During Match


The interim Gunners boss has backed the Gabon forward in what was seen as a bizarre incident. 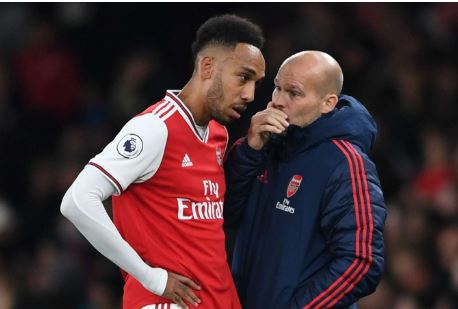 Arsenal caretaker manager Freddie Ljungberg has seen nothing wrong in Pierre-Emerick Aubameyang's decision to have a toilet break while the Premier League game against Brighton and Hove Albion was going on.

The 30-year old forward was seen heading towards the tunnel in the closing stages of the game, with the Gunners down 2-1, only to return moments later.

This displeased some fans considering there was no striker on the pitch at that moment after Alexander Lacazette was substituted in the 77th minute.

Ljungberg, however, revealed Aubameyang simply had to answer nature's call.

''I actually didn't even notice he went off, I just saw him come back on after he'd been off for a couple of minutes,'' the 42-year-old told the media after the game.

The defeat at the Emirates Stadium has dropped Arsenal to 10th place on the Premier League log, 10 points away from the top four.

They travel east of London to face West Ham United next Monday.