Drama As NURTW Members Fight For Control Of Park In Lagos


Members of the NURTW have engaged each other in a bitter fight over plans to impose a chairman to takeover the park. 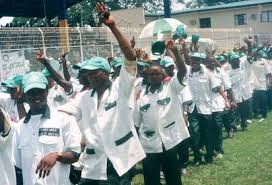 There was tension in the Pako-Aguda area of Surulere, Lagos State, on Tuesday, as hoodlums from the Aguda and Ijesha areas again engaged in a supremacy battle and exchanged gunshots.

PUNCH Metro had reported that two persons, Timileyin Odulana and one Alagodo, lost their lives on Sunday and Monday in the clash that had been going  on for a week.

The deceased and scores of injured persons were alleged to belong to different factions of the National Union of Road Transport Workers in the Aguda and Ijesha areas of the state.

The factions were said to be fighting for the control of a motorpark in the area.

On Tuesday around 6am, hoodlums from the Ijesha area, in a bid to avenge the death of one of the victims, were said to have stormed the Pako-Aguda area and engaged their opponents in sporadic gunshots.

A resident, who identified himself simply as Segun, said the residents heard gunshots on Monday evening and on Tuesday morning, adding that they had to run helter-skelter in order not to be caught in the crossfire.

He said, “The hoodlums attacked one another around 9pm at the Cassette bus stop in Aguda on Monday, and this morning (Tuesday), I saw people running helter-skelter when the hoodlums were fighting again.

“People have not been able to do their normal business and that has been the situation for some time.”

But a source in the area said the policemen stationed at strategic locations in the area restored normalcy, adding that the hoodlums were members of the NURTW fighting over a motor park.

The source stated, “The hoodlums continued the fight this morning (Tuesday). They came in from Ijesha to the Mobil filling station in the Pako-Aguda area to fight their adversaries. The fight is over a park, because we heard that the Chairman of the NURTW in the state, Musiliu Akinsanya, aka MC Oluomo, wants to impose a chairman to take over the park and they are resisting it by fighting.

“The hoodlums usually arm themselves with stones, cutlasses and guns, and face law enforcement agents directly. They have been causing mayhem in the area.”

When contacted, the state Police Public Relations Officer, Bala Elkana, said no casualty was recorded during Tuesday’s clash as the hoodlums met with stiff resistance from the police personnel deployed in the area.

Elkana stated, “Early in the morning, around 6am, hoodlums from the Ijesha area, who were on the run, regrouped and attempted to attack the Aguda boys, but they were met with stiff resistance from the police team that was deployed in the area on Monday. No casualty was recorded because they had no opportunity to operate.

“The hoodlums were in large numbers and we have continued with our patrol and surveillance of the area. We have created a buffer zone between the two communities to prevent the hoodlums from crossing over to wreak havoc until the peace process is concluded.