The coming days promise to be interesting in the Edo state chapter of the All Progressives Congress (APC) ahead of next year’s governorship election in the state. 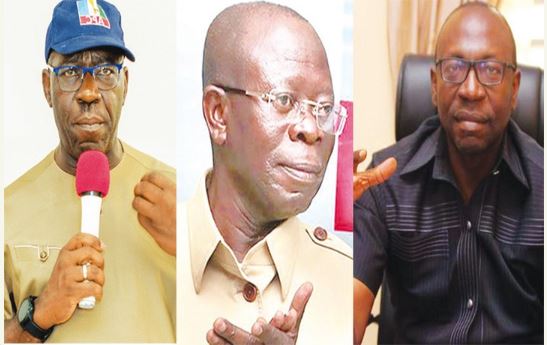 Although the two are expected to be the main contenders, others who may also contest on the APC platform are Chris Ogiemwonyi, Charles Airhiavbere, Pius Odubu, the yet-to-be-sworn in Niger Delta Development Commission’s (NDDC) board chairman.

Though the Independent National Electoral Commission (INEC) is yet to announce a date for the governorship election, political analysts believe that the primary to determine the party’s flag bearers will likely take place in June while the election may hold in September.

Ize-Iyamu, who recently defected to the APC, was formally welcomed into the party last week at his residence by a faction of the APC loyal to Comrade Adams Oshiomhole, the party’s national chairman and former governor of the state.

Both Oshiomhole and Obaseki have been at loggerheads over unresolved political differences.

It has been speculated that Oshiomhole persuaded Ize- Iyamu, a grassroots politician with a strong followership in the state, to join the APC where he would use his influence as national chairman to give him the party’s ticket.

There are also speculations that Obaseki may find his way to the PDP, the major opposition party in the state. However, he has repeatedly denied this, saying he had no plans to quit the APC.

“If a handful of individuals start misbehaving and feel we will leave the party for them, they will be the ones to leave,” Obaseki had said.

Also, Charles Idahosa, a former Commissioner for Information in the state, said the governor had no plans to dump the APC for another political platform in order to secure the ticket for his re-election.

He said despite the feud between Obaseki and Oshiomhole, the governor had done so much to deserve his second term and therefore could not be pushed aside by Oshiomhole and his foot soldiers in the APC.

“There is nothing like that. It is a black lie that the governor is leaving the party for another. Governor Obaseki is not leaving the APC for anybody. He is getting the party’s ticket and he must do his second term,” Idahosa declared.

However, leaders of the APC in Edo State, under the aegis of the Edo Peoples Movement (EPM), have said the governor does not deserve a second term, insisting they would shop for a better candidate that would fly the party’s flag in 2020.

Samson Osagie, a former minority whip of the House of Representatives, said: “Governor Obaseki is only dreaming to think that because he is the custodian of our collective patrimony he will intimidate us and hoodwink Edo people to shy away from giving him a run for our money he is amassing to run for second term.

“Let this serve as notice to him that some of us are going to present ourselves for next year’s gubernatorial elections and by the time the array of contestants are unveiled, Edo people will not choose deceit over sincerity, rhetoric over substance, and a government that has encouraged capital flight from the state over a government that will make sure the resources of the state circulates among its citizens.”

On the mode of the primary to be adopted, a credible source in the party said since there were two factions in the state, the National Working Committee (NWC) of the party led by Oshiomhole would determine the mode of primary to be used in selecting the party’s candidate.

“The APC has three methods for the primary. They are direct, indirect, and consensus. The party usually gives the states to choose the method they want.

“But just as it happened in Kogi APC during the just concluded governorship election, the NWC may step in and adopt a method if the party is factionalised.

“In Edo today, the party is factionalised with two state chairmen. Col. David Imuse, who is from the Oshiomhole camp, is claiming to be the state chairman of the party while Anselm Ojezua, who is solidly behind Governor Obaseki, has also said he remains the authentic chairman.

“If this is not resolved, the NWC may wade in adopt the mode of primary for the election,” he said.

Speaking with a correspondent on Tuesday, Ize-Iyamu said he would do all he could to ensure that the misunderstanding in the party was resolved. He also said he had instructed his followers who defected with him from the PDP to register at their ward levels.

“We will continue to do all we can to ensure that the little misunderstanding is resolved. But we have told all our people to go and join the party at the ward level, just as I did. Luckily, in many of the wards, we don’t have any faction there.

“We will try and bring more people into the APC in the coming days. I believe the whole tension will soon come down and we will have a united party,” he said.

Also speaking on whether he would contest the governorship election on the APC platform, Ize-Iyamu said only God would determine that.
He said: “We leave that to God and for our people. Next year may appear near but it is still far. Let’s keep our fingers crossed and see how it goes.”

However, Barrister Anselm Ojezua, Edo State chairman of the APC, said on Wednesday that the membership status of Ize-Iyamu was not clear as a lot of people believed that he defected to Edo People’s Mandate (EPM) and not the APC.

According to Ojezua, “What is more important and fundamental is that we have to, first of all, establish his (Ize- Iyamu) status. There are some people who believe that what he joined was EPM, not APC. Can he effectively join APC without the leadership of the party knowing about it? That is not possible.