A huge fire outbreak has razed through a community in Rivers state, destroying buildings in the process. 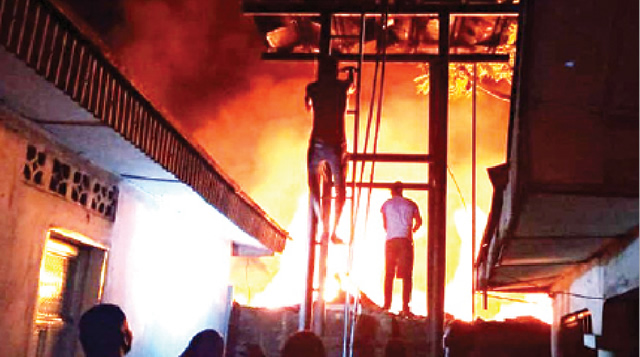 Scene of the inferno

According to a report by Punch Metro, serious tragedy struck in the Rumueprikom community in the Obio/Akpor Local Government Area of Rivers State on Tuesday as fire gutted some houses on Ekwurugwu Street, destroying properties worth millions of naira.

The fire was said to have started from one of the shanties close to a storey building around 9.10pm.

It was gathered that a mentally-ill woman had lit fire near a corner, where adulterated petrol and kerosene were kept within her residence, an action that caused the inferno to spread quickly to two other houses.

No life was lost to the incident, which caused pandemonium on the street and neighbouring streets in the area.

Residents, who noticed the inferno, had a tough time trying to extinguish the fire, which razed all the shanties, a storey building and the Grace Apostolic Church.

A source told Punch Metro that none of the occupants of one of the affected buildings was around when the incident happened as they were said to have gone for their church’s Christmas retreat.

The source, who spoke on condition of anonymity, recalled that a similar incident occurred in the same area on Christmas Eve four years ago, adding that properties worth millions of naira were lost to the incident.

A trader, who identified herself simply as Gloria, said she was taking her bath after the day’s work when she heard people shouting “fire, fire,” adding that she rushed out of the bathroom, went into her room and took some money before rushing outside to avoid being trapped inside by fire.

Gloria explained that she bought detergent with which she mixed with water to quench the fire, but to no avail, adding that she lost her properties to the inferno.

She said, “I even bought N200 detergent to put out the fire, but to no avail. My younger brothers have travelled home for Christmas; so, nobody could help me. I could not remove anything; we lost everything to the fire.

“The fire was caused by one of our neighbours, who is mentally-ill; some of the residents sell kerosene and petrol for survival, but they know that these houses are shanties and they should have removed the fuel from the room to a safe place. They kept it inside one of the rooms and the woman mistakenly caused the fire.”

Another source, who simply identified herself as Blessing, said some residents opened the overhead tanks attached to another storey building close to the shanties in order to use the water stored in them to extinguish the fire.

While officials of the Rivers State Fire Service rushed to the scene, policemen were on the ground to prevent streets urchins from looting the properties that were supposed to be salvaged.

The fire was, however, extinguished around 11.15pm after the firemen had worked tirelessly for about an hour as their efforts stopped the inferno from spreading to other buildings.

Confirming the incident, the state Police Public Relations Officer, Mr Nnamdi Omoni, told our correspondent that no life was lost.