Governor Wike And His 'Kissing Game'


Dubbed Nigeria's most romantic governor and Mr Wike has really shown his romantic side on several occasions with his wife. 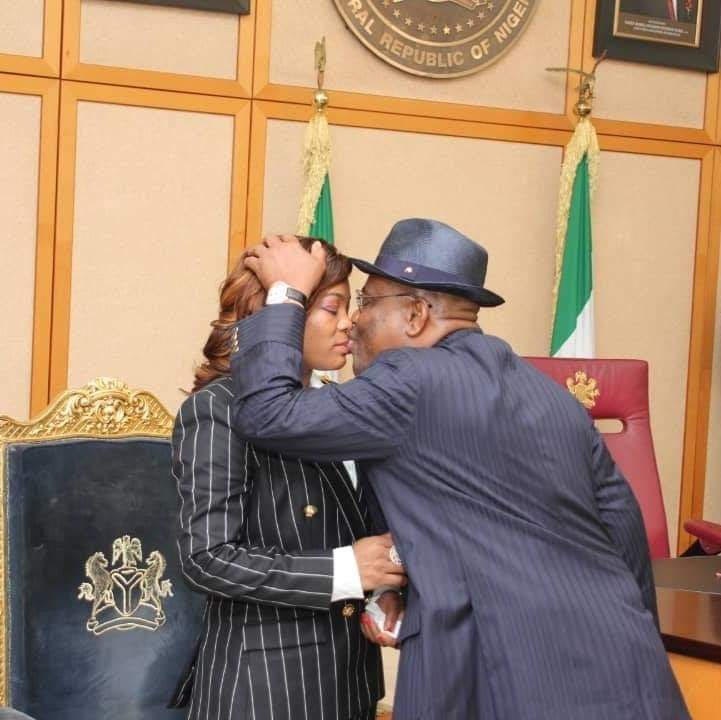 Wike and his wife

A google search of the Rivers State Governor, Nyesom Wike, and his wife, Eberechi, will bring up so many photos of them passionately kissing and locked in a loving embrace.

In this part of the world, public displays of affection (PDA) by individuals is not really commonplace. For public office holders, it is almost unimaginable.

But for the ‘first citizens’ of Port Harcourt, there are literally no limits.

The task of steering the affairs of Rivers State notwithstanding, Mr Wike never fails to steal one or two long kisses from his First Lady every single time they attend a public function together.

Mrs Wike is a judge of the Rivers State High Court of Justice.

It is no longer a big deal.

The official photographers of the Rivers State government house and residents are used to their numerous PDAs.

Shortly after the swearing-in of judges at the Government House in Port Harcourt on Tuesday, the couple engaged in yet another round of passionate kiss.

Dubbed Nigeria’s most romantic governor, Mr Wike has shown his romantic side on several occasions with his wife.

The couple have been married since 1999.

Attempting to keep tabs of the number of times they have kissed in public amounts to a herculean task. But a few of their PDA moments haven’t gone unnoticed.

Photographers at the event captured a romantic moment of the governor passionately kissing his wife at the event.

The couple also stole the show when they locked lips at the 2016 Africa Movie Academy Awards which held in Port Harcourt.

In August of the same year, the governor was spotted kissing his wife at the 56th Nigerian Bar Association (BAR) Conference in Port Harcourt.

They once again kissed at the International Federation of Women Lawyers (IFWL) dinner which was held at the state government house, in Port Harcourt.

At the 2017 Independence Day celebration in Port Harcourt, they were photographed kissing while spectators watched.

On October 5, 2019, the governor celebrated his victory at the election tribunal with a long romantic kiss with his wife, at the Government House, Port Harcourt.

The Wikes shared a kiss in the presence of well-wishers and party faithful.

In commemoration of their 17th wedding anniversary in 2016, Mrs Wike shared their love story on Facebook.

“For three years, we sat in the same lecture rooms and halls but never passed a word between each other,” her post read.

The couple have three children.

On the humorous side, when does PDA become ‘too much’?

According to an article on PDA etiquette on spruce.com, a subtle touch or expression of affection can be much more romantic than an ’embarrassing’ PDA.

It said most people will agree that holding hands and occasional tender touches or glances are better ways to show your affection than groping.

Here are some basic rules for public displays of affection as outlined by etiquette coaches on spruce.com:

Kisses: You shouldn’t have a long, drawn-out kiss in front of an audience unless you are acting on a stage. Even then it’s questionable and should come with a rating.

Touching: An arm draped around someone is okay when you are sitting or casually strolling through the park. It is never okay to touch anyone else in a private area in public.

Groping: Groping is never acceptable in public. Certain gestures may even be illegal in public.

Tastes and nibbles: A face is not a lollipop, and you are not a vampire, so don’t lick or bite the person you love in front of other people.

Check Out How 2face Idibia Celebrated His Wife, Annie Idibia On Her 37th Birthday
Recent Stories