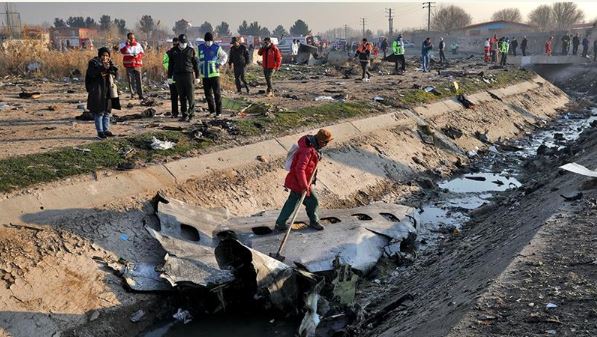 A new video has surfaced showing the moment two missiles hit a Ukrainian passenger plane over Iran's capital, Tehran, killing all 176 passengers and crew on board.

The New York Times said it had verified the security camera footage, which showed two missiles being fired 30 seconds apart, neither of which brought the plane down immediately.

In the video, the aircraft is seen flying for several minutes, on fire, before crashing to the ground and exploding.

The newspaper said the first strike disabled the plane's transponder before it was hit by the second missile.

For days, Tehran repeatedly denied reports that the Boeing 737-800 plane had been shot down.

An earlier video released on Friday also showed that the plane was hit by a missile was also published.

The video, first reported by the New York Times newspaper and CNN, is consistent with statements made by Canadian, US and UK officials, who said intelligence indicated that an Iranian missile brought down the plane, a conclusion initially dismissed by Iran.

The second blurry footage shows the plane on fire and circling back to Tehran's airport, the Times said. Minutes later, it exploded and crashed.

The footage was shot from a rooftop in Bidkaneh, a village four miles from an Iranian military site, the Times said.

Angry protesters, most of them students, have taken to the streets in the wake of the tragedy, chanting slogans against Iran's leaders and demanding accountability.

Iran's judiciary on Tuesday announced the first arrests over the accidental shooting, without naming who or how many people had been detained.

Fars news agency has also been quoted as saying that the person who took the first video was also arrested by authorities.