Boxing promoter, Eddie Hearn has revealed that the anticipated between bout between Anthony Joshua and Tyson Fury will soon be a reality. 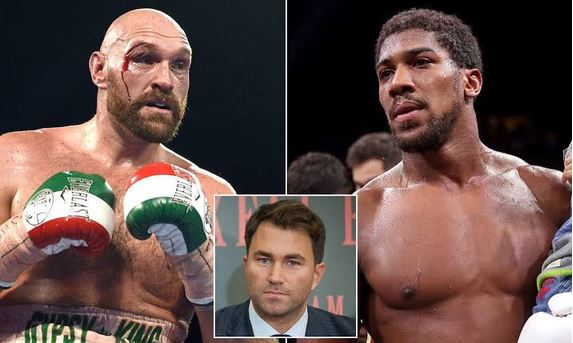 According to a Boxing Scene report, Eddie Hearn, promoter for IBF, IBO, WBA, WBO heavyweight champion Anthony Joshua, has already spoken to his boxer and he wants to face newly crowned WBC champion Tyson Fury next.

Fury made a statement on Saturday night when he scored two knockdowns before stopping Deontay Wilder in the seventh round of their rematch at the MGM Grand in Las Vegas.

Their first bout ended in a controversial twelve round split draw in December of 2018.

There is a contractual clause, where Wilder has the option of forcing an immediate third fight.

The third contest would likely take place in the summer, in June or July, if Wilder goes in that direction.

“I’ve already spoken to AJ and he wants to go into this fight next,” Hearn told Talk Sport.

“We have to make this fight happen. We will never, ever get the chance for two Brits to fight for an undisputed heavyweight world championship. I promise you we will do everything we can to make this fight. It has to happen.

“We will never get this opportunity in this sport to do this again with two Brits. I’ve already spoken to AJ – he wants to go straight into this fight next. He loves the Tyson fight, he has has zero fear of fighting Tyson Fury. He has been through everything already and he wants to be undisputed and this is the chance for our sport to have one of those legacy moments that we will never get the opportunity to have again.

"I heard out of his camp he was going to be aggressive and go for it and I thought it was absolute madness and it ended up being genius from him and his team. Just a wonderful performance. What a time for British boxing – an incredible night. I felt like he could school him but I didn’t think he could school him and beat him up, and he did that.”