Former Head Of State, Abdulsalami Reacts To Removal Of Sanusi As Emir Of Kano


It has been revealed that if President Buhari had intervened, Sanusi wouldn't have been removed as Emir of Kano. 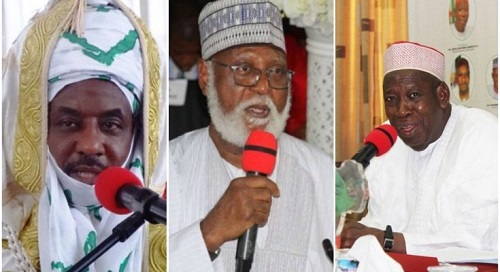 Abdulsalami Abubakar has reacted to the removal of Sanusi as Emir of Kano
A former Head of State, General Abdulsalami Abubakar, has revealed that if President Muhammadu Buhari had intervened in the misunderstanding between Sanusi Lamido and Governor Abdullahi Ganduje, the former Emir of Kano wouldn't have been dethroned.
According to Punch, he said a committee set up to resolve the dispute between Governor Umar Ganduje of Kano State and Sanusi met with Buhari over the matter.
Abubakar in an interview with Voice of America Hausa Service, monitored by one of our correspondents, said the committee met the governor and the Emir.
He stated, “We met with the Emir and the governor separately, then we met them together. We tried to mediate. All I can say is that there was a misunderstanding and satan got involved.
“The governor had the yam and the knife in this matter because the emir is under him.
“I can’t say whether or not President Buhari intervened because I was not in Nigeria. But before I left, we went to him with our report and we discussed. I cannot say whether he intervened or not but if he intervened, it would be surprising we will be where we are now. But no matter what, if Allah says a thing will happen, there is nothing anybody can do.”
Top Stories