Nigerian international and top striker for French club, Lille has won the player of the year award from his club. 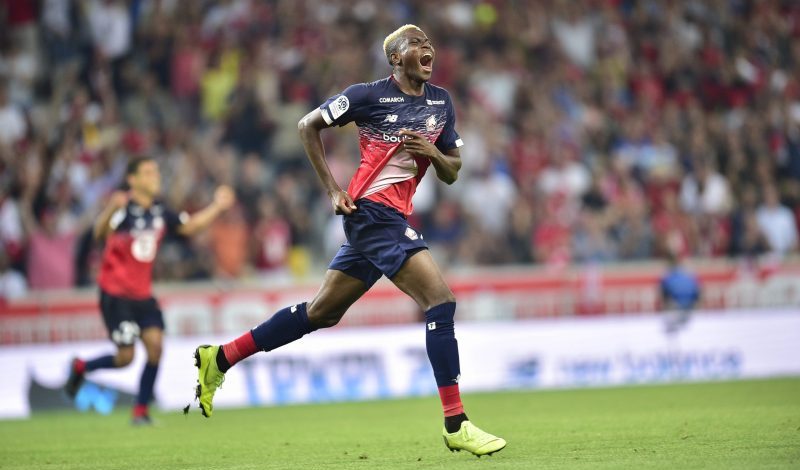 Victor Osimhen
Nigerian striker Victor Osimhen has added an award to his name after being voted as the Player of The Year at his French club Lille.
Osimhen’s emergence as Lille’s best player in the truncated 2019-20 season is not surprising for many going by the spectacular displays of the 21-year old in what is just his maiden campaign in Ligue 1.
Among other feats; Osimhen had scored 18 goals and provided eight assists in all competitions for the French Ligue 1 side, before the outbreak of the Coronavirus pandemic disrupted the season.
It is these breathtaking performances that have seen Osimhen be linked with a possible transfer to several top clubs across Europe.
On the list of potential suitors for Osimhen are Napoli, Liverpool and Chelsea who are all said to be willing to pay heavily to lure the striker away from Lille.
Since his record-breaking performance at the 2015 U-17 World Cup, where he scored 10 goals -the most by any player in a single tournament- Osimhen has continued to shoot, despite having a torrid time at Wolfsburg where he was denied enough playing time.
The same way Osimhen has been the toast of fans at his club, he has also been tipped for greatness with the Nigeria national team, the Super Eagles.Already, some have identified Osimhen as the next Rashidi Yekini.
On 14 August, 2019, the coach of the Nigerian National Team, Gernot Rohr, extended an invitation to Osimhen for a friendly against Ukraine that was played on September 10, 2019, in Dnipro Arena, Ukraine, which ended in a 2–2 draw.
He was also included in the Super Eagles team to face Brazil in a friendly match in Singapore on 13 October 2019 and also helped Nigeria to win bronze at the 2019 African Cup of Nations in Egypt.
Before Osimhen’s emergence as the player of the year at Lille, another Nigerian, Simon Moses, had also been crowned Player of the Year, this time by Nantes.
Both Osimhen and Simon have been nominated for the African French Player of The year.

Victor Osimhen has been named as Lille's Player of the Year. pic.twitter.com/gsvirjq9WP