Angel Gomes might be on the verge of a lucrative career reviving offer at a new club. 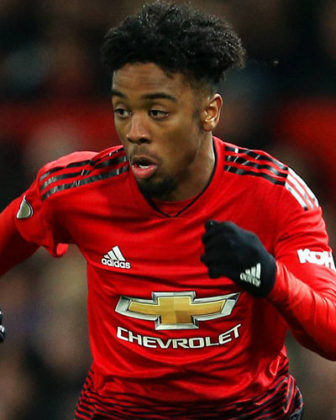 Gomes
A former Manchester United star, Angel Gomes has been handed a lucrative offer to revive his career by French Ligue 1 side Lille.
The London born star is now considered as a formidable replacement for Victor Osimhen, SunSport reports.
French outlet RMC Sport are reporting that Lille have claimed they are already in talks with the player’s representatives.
Recall that Gomes sometime ago visited man of God, Prophet TB Joshua over issues concerning his football career after which he prayed for him.
Gomes is currently out of contract after he left Manchester United a month ago as he failed to accept new terms offered by the Old Trafford outfit.
It was gathered that the 19-year-old had been with United since joining their academy at the age of six.
He featured in a total of ten matches for the Red Devils, including six appearances under Ole Gunnar Solskjaer this season.
But despite leaving the Red Devils, Gomes could still get some European action next season as Lille will play in the Europa League.
They finished fourth, just one point off a Champions League place, when the Covid-19 crisis brought the French season to an early end.
The club's coach Christophe Galtier is seeking attacking reinforcements with star frontmen Victor Osimhen and Jonathan Ikone set to leave during the summer.
Top Stories