Oh No! See What A Slay Queen Cooked With N7k - Nigerian Man Calls Out His Runaway Babe (Video)


A woman who ran away from a man's house after collecting N7k to cook rubbish has been called out on social media. 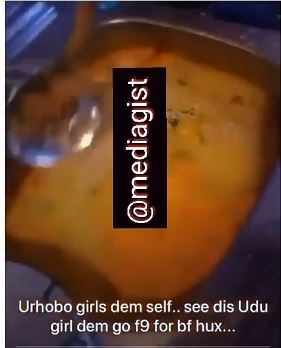 The woman cooked rubbish after collecting N7k
A Nigerian man has taken to social media to call out a slay queen who ran away from his house abandoning her personal belongings after cooking rubbish for him.
The incident happened in Delta state.
According to the man, he gave the slay queen N7000 to cook “egusi” soup, but she cooked total rubbish.
He apparently invited her over to his house, and she demanded N7000 from him to prepare a sumptuous meal.
However, after she noticed her food wasn’t pleasant to the eyes, she ran away, leaving her bag, ATM card and other properties behind.
Watch video below:

Slay Queen abandons all her properties and disappears after cooking rubbish with the N7k she was given to cook Egusi Soup at a Guys house in Udu Road in Delta State!!! . Follow @mediagist for more exclusive updates.