A mother who is in love with her 19-year-old son has asked people to allow them enjoy the relationship in peace. 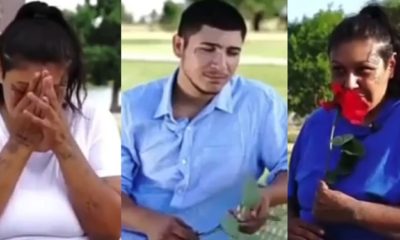 The mother wants to spend the rest of her life with her son after falling in love with him
A mother that has fallen in love and is now dating her 19-year-old son, Carlos has begged people to allow her spend the rest of her life with her son.
She spoke following backlash after their relationship went public.
She said at first, when she noticed she was in love with her son, she called him on a particular day and expressed her feelings for him.
“I’m sorry I don’t know how you’re gonna react to this. I’m your mom and you’re my son and I’m in love”, she told her son.
Her son, in his response said;
“I was scared to tell you but I am too”.
She said they have both accepted the fact that they can’t do without each other because they are in love, and she doesn’t feel weird about it because he is the best thing that has ever happened to her.
She said they have been attacked, even stabbed since their relationship went public.
Watch video below: