The suspects apprehended by police operatives attached to the Area Command, Minna, following a tip-off. 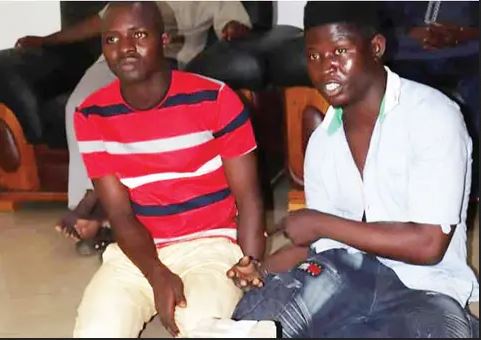 Two suspected robbers have been arrested by the police in Niger State for stealing the sum of N6m from a businessman in Tegina, Rafi Local Government Area of the state.

According to PUNCH Metro, the suspects apprehended by police operatives attached to the Area Command, Minna, following a tip-off.

They were identified as Abdullahi Maikudi 27, of Katsina State; and Rabiu Abdullahi, 23, of Kano State.

PUNCH Metro learnt that Maikudi lodged in a hotel in Tegina, where he met the businessman on September 25, 2020.

He was said to have established friendship with the victim, saying they were from the same state.

Our correspondent gathered that he offered the victim a cup of tea laden with tramadol, which made the buisnessman to sleep within 10 minutes of taking the drink.

Maikudi subsequently made away with his bag containing N6m.

Checks revealed that the suspect fled with the money to Kano State, where he met his accomplice, Abdullahi.

Police operatives traced them to Kano State and foiled their plans to leave the country with the stolen money.

Maikudi told PUNCH Metro that he usually drugged his victims  before dispossessing them of their valuables.

He claimed to have been doing this for over four years.

“All my victims since I started this business, I drug them with tramadol tablets or syrup so that they will fall asleep in 10 minutes and by then, I would have finished my operation. I usually put it in their tea or food,” he said.

The state Police Public Relations, Wasiu Abiodun, confirmed the incident on Thursday, adding that the police recovered from them N3.8m and 410 Cefas.

Abiodun said investigation was in progress, adding that the suspects would soon be arraigned in court.