Nigeria's President Muhammadu Buhari has been challenged to name the person who ordered Lekki shooting. 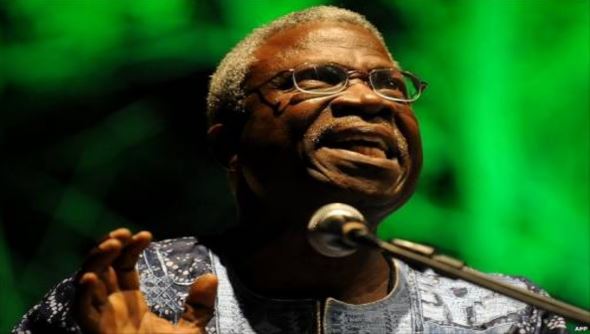 Professor Niyi Osundare
A Nigerian Poet and Professor, Niyi Osundare has called out President Muhammadu Buhari begging him to name the person who ordered soldiers to shoot and kill unarmed protesters.
Recall that protesters at Lekki toll gate were shot at by soldiers on Tuesday attracting international condemnation.
Following the shooting, Nigerians urged President Buhari to address the nation.
Addressing Nigerians on Thursday, Buhari called for an end to the protest, adding that his government had already accepted and started implementing the demands of the protesters.
He, however, failed to acknowledge the use of excessive force by soldiers of the Nigerian Army on protesters in Lekki Toll Plaza.
In a statement titled, ‘President Buhari, Say Something,’ Osundare asked Buhari to reveal who ordered the shooting.
The poet disclosed that many saw Buhari’s silence on the matter as a sign of contempt while others said it was due to lack of concern.
Osundare said, “You have an urgent, even existential reason to prove them wrong. Tell us: who ordered the Lekki Massacre? Who oversaw its execution? What sanctions are you putting in place for those perpetrators? The Nigerian people are waiting to know. The whole wide world is waiting.”
Top Stories