This follows a similar trend of discovery and looting in some states across the country. 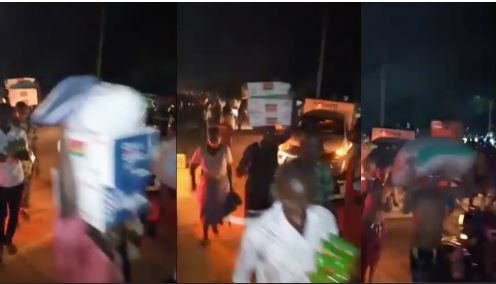 Some of the looters

The many residents of Jalingo, Taraba State, have stormed a COVID-19 palliatives warehouse, looting the building and carting away items, according to SaharaReporters.

This follows a similar trend of discovery and looting in some states across the country.

The looting of COVID-19 warehouse started from Lagos and has extended to states like Oyo, Osun, Plateau, Edo and Kwara.

It was gathered that the residents overpowered security operatives, who watched helplessly as the people made away with different food items.

The looting, which started in the evening, continued till 9pm as more people came for their share of the hoarded palliatives.

In videos of the looting obtained by SaharaReporters, residents could be seen driving tricycles and cars as well as pushing carts into the warehouse for easy carriage of the food items.

Another warehouse stacked with covid palliative discovered in Taraba.. ThankGod say this one no pass me by pic.twitter.com/mkCR2216oK

Taraba state palliative warehouse has also been found. I'm having second thoughts about this I mean who is giving out the locations of these warehouses and why? Most of all why everywhere at the same time? I think there is something fishy about this whole situation. pic.twitter.com/n0LD9V2FpN

However, there are reports of a stampede as more people trooped into the warehouse.

About two people are feared dead as the looting went on unhindered.