Revealed! FSARS Men Who Are Wanted At Lagos Inquiry Have Disappeared From Sight


The lawyer then told the Lagos State Judicial Panel of Inquiry for Restitution for Victims of SARS Related Abuses and Other Matters to step down two cases. 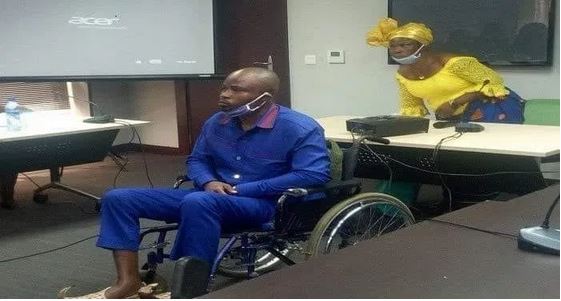 Ndukwe Ekekwe: the SARS office that pushed him down to paralysis can’t be found

Some of the officers of the disbanded Federal Special Armed Robbery Squad are feared to have disappeared.

The FSARS men are now avoiding the inquiry set up by the Lagos government to probe their activities, PM News reports.

Proceedings were adjourned today when lawyers for the Nigeria Police said they could not find the officers, whose activities are under scrutiny.

The lawyer then told the Lagos State Judicial Panel of Inquiry for Restitution for Victims of SARS Related Abuses and Other Matters to step down two cases.

The cases arose from the petitions of Mr Ndukwe Ekekwe vs SARS and Mr Olajide Fowotade vs FSARS.

Ekekwe, a 34-year-old trader petitioned that he became paralysed when he was pushed from a two-storey building by men of the disbanded Special Anti-Robbery Squad (SARS).

The police counsel, Mr Emmanuel Eze who had been cross-examining Ekekwe had asked for an adjournment because the legal team of the police were unable to get in touch with the officers of the disbanded SARS.

Ekekwe provided the photograph and phone number of Haruna Hamza, the SARS officer who was a member of the team that allegedly pushed him from the building.

“We will apply for a very short adjournment. The reasons are because of the disbandment of SARS and other tactical teams, we have difficulty getting in touch with them.

“We are in the process of getting there and the phone number of the that the petitioner provided here did not go through.

“I apply that the panel tries the number, it did not go through, in the overall interest of justice we apply for this adjournment,” Eze said.

In the Fowotade matter, the petitioner in his testimony on Oct. 31, told the panel that a policeman called ‘Ayo’ of the Ketu Police Station had brutalised him during a traffic dispute.

The petitioner said he lost his front teeth due to the police brutality.

During Friday’s proceedings, the police legal team said it was unable to contact the police officer.

“The petitioner did not mention the surname of Ayo, we could not trace the name to Zone 2 where he claimed to have reported the incident. We could not make headway.

“We need to get the case file of Ayo and his contact. We are constrained to ask for an adjournment because we are without the Ayo or the case file,” Eze said.

Reacting, Fowotade who appeared distressed, challenged the submission of the police counsel.

“Madam Dolapo Badmus knows everything, how come you do not know Ayo, is he a ghost?,” Fowotade said.

Chairman of the panel, Justice Doris Okuwobi (Rtd) said that police were not making enough effort defending the allegations, though three police officers were mentioned by the petitioner.

Eze told the panel that the legal team is encountering challenges tracing the officers.

“Akpan the DPO is retired, Mr Aderanti is retired and he did not mention Ayo’s surname.

“Dolapo Badmus has handled so many matters and it will be difficult to get in touch with the retired officers,” the police counsel said.

Justice Okuwobi noted that it will not augur well for the respondents (police) not to contact the police officers mentioned by the petitioners.

The retired judge said that the panel will no longer entertain adjournments made at the instance of the police.

She adjourned both cases to Dec. 1 for hearing