He revealed that one of the men who accosted him, held a cutlass and tried swinging it at him but missed. 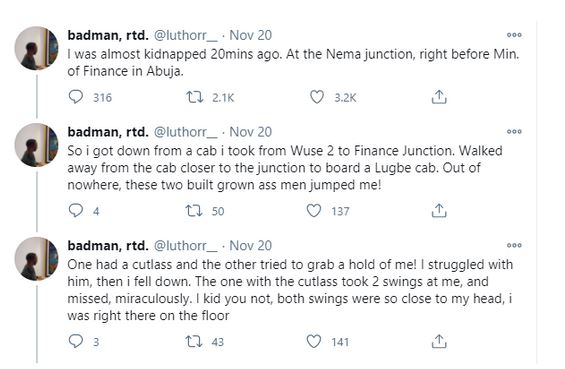 A Nigerian man took to Twitter to recount how he was almost kidnapped in Abuja.

According to @luthorr_, the incident occurred at Nema junction, right before the Ministry of Finance in Abuja on November 20. He revealed that one of the men who accosted him, held a cutlass and tried swinging it at him but missed.

The Twitter user said the suspected kidnappers took his bag containing his laptop, notepads and chargers.

"I was almost kidnapped 20mins ago. At the Nema junction, right before Min. of Finance in Abuja.

So i got down from a cab i took from Wuse 2 to Finance Junction. Walked away from the cab closer to the junction to board a Lugbe cab. Out of nowhere, these two built grown ass men jumped me!

One had a cutlass and the other tried to grab a hold of me! I struggled with him, then i fell down. The one with the cutlass took 2 swings at me, and missed, miraculously. I kid you not, both swings were so close to my head, i was right there on the floor and as the cutlass hit the floor, sparks!

I scrambled up but they snatched my bag containing my laptop, notepads, chargers. Just lucky my cell and my wallet were in my pocket. I can't feel my legs!

My sister and brother-in-law just picked me up. Going home now...

It's my first week using commercial transportation in Abuja. And I really regret it.  Bruises on both my arms, legs, my back and my legs won't stop shaking! I almost lost my life tonight! I can't explain what I'm feeling rn!