In a statement issued by the polytechnic’s spokesman, he said the management of the polytechnic has expelled Mr Oladipo following the Students’ Disciplinary Committee’s reports which equally found him guilty of fraud. 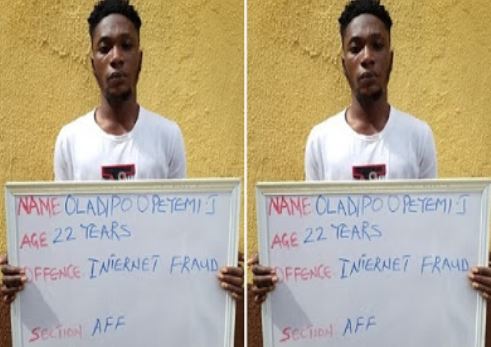 Oladipo Juwon, a Business Administration student of the Federal Polytechnic Offa, Kwara State, has been expelled by the institution after he was recently convicted for his involvement in cybercrime.

The 23-year-old student was sentenced to nine months imprisonment or an option of N250,000 fine by a High Court in Ilorin, Kwara State on Thursday.

Mr Oladipo was arraigned by the Ilorin Zonal Office of the Economic and Financial Crimes Commission (EFCC) on a three-count charge bordering on cheating and attempting to cheat contrary to and punishable under Section 324 of Penal Code Law of Kwara State.

According to the judge, the sentence would commence on December 23 in view of the ongoing examinations at the Federal Polytechnic, Offa, involving the convict.

The judge also ordered the convict to forfeit his mobile phones and restitute his victims.

In a statement issued by the polytechnic’s spokesman, Olayinka Iroye, he said the management of the polytechnic has also expelled Mr Oladipo from the institution following the Students’ Disciplinary Committee’s reports which equally found him guilty of the offence, though he pleaded for leniency.