Nigerian boxer and world champion, Anthony Joshua has shown that he's balling after showing off his 2021 Range Rover SUV. 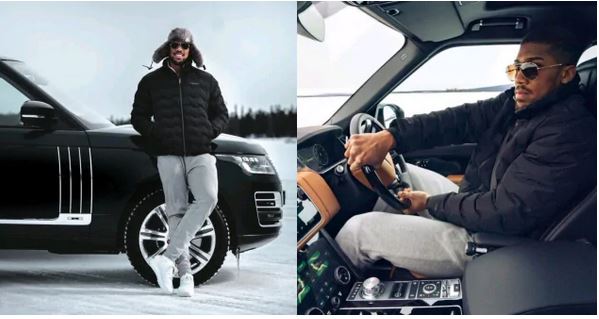 Anthony Joshua shows off his latest ride
2-time world champion, Anthony Joshua is living the best time of his life just days after beating Kubrat Pulev in London fight.
The Nigerian and British boxing champion has been spotted showing off his new 2021 Range Rover SUV after taking it for a test ride.
Anthony Joshua traveled to the Jaguar Land Rover Ice Academy in Sweden where he was presented the chance to have the feeling of the latest ride.
The Range Rover offers a roomy interior, a powerful engine lineup, and excellent off-road ability, but it also has a cumbersome infotainment system and a below-average predicted reliability rating.
Joshua took to his Instagram page to show his fans a photo of himself driving the new car and also standing beside it in incredible moment.
So far in his professional boxing career, Anthony Joshua has had 25 fights winning 24 and lost one against Mexican boxer Andy Ruiz.
The world are now expecting the fight between Tyson Fury and Anthony Joshua to come up which will be one of the biggest duels in the history of boxing.
Tyson Fury was superb in his last fight against Deontay Wilder beating the American boxer mercilessly.
The Englishman has been saying that he is ready to face Anthony Joshua in his next fight promising the Nigeria to brush his face.