The democrats seem to have won big in the 2020 US elections by clinching to two senate seats. 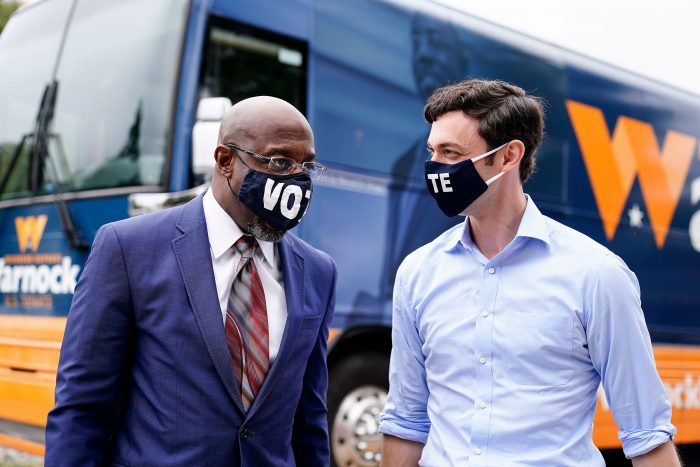 Raphael Warnock and Jon Ossoff Democrat candidates win Georgia senate races
The democratic party has taken over the United States senate after winning two senate seats in Georgia.
This means that the era of Republican majority leader, Mitch McConnell is over, with the two parties now tied 50-50, needing the Vice-President to cast deciding vote.
And the decider will be Vice-President elect Kamala Harris, when sworn-in on 20 January.
The CNN has already projected the victory of Democrat Reverend Raphael Warnock in one of the Georgia Senate races.
He was leading Republican Kelly Loeffler by over 40,000 votes.
Warnock is the senior pastor at Atlanta’s Ebenezer Baptist Church — a role once held by Martin Luther King Jr.
Jon Ossoff, the second Democrat, challenging Republican incumbent David Perdue, was also ahead by over 9,000 votes.
Ossoff campaign said the candidate was unstoppable, as counting of votes in a heavily Democratic county was being awaited.
The likely victories for Warnock and Ossoff were a startling rebuke to President Trump, who held a rally for both Republican candidates on the eve of the election, the hill.com said.
The newspaper said the victories will also deepen the in-fighting in the Republican party.
Trump has repeatedly insisted that the presidential election results in Georgia in November were fraudulent despite no evidence.
He has attacked Gov. Brian Kemp (R) and Georgia’s Secretary of State Brad Raffensperger.
On Sunday, a recording of a phone call from the previous day, in which Trump harangued Raffensperger to “find” enough votes to deliver the state to him, sparked a firestorm.
Republicans have long feared that his antics and allegations could depress turnout among his supporters for the run-off elections.
Now Trump has become the first GOP presidential candidate to lose Georgia since 1992.
Top Stories