A little 3-year-old boy has gone missing in Lagos leaving his family members in a state of despair. 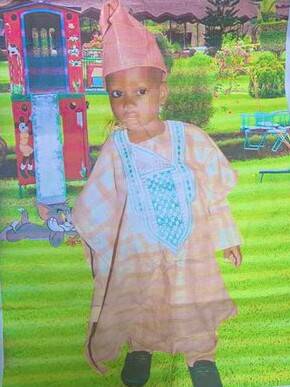 Qadri
The abduction of a little three-year-old boy has led to the discovery of a secret kidnappers' tunnel in the Orile area of Lagos State last week.
The three-year-old, Abdul Qadri Kazeem, went missing on Saturday.
SaharaReporters learnt that Abdul Qadri was believed to be taken away from his mother's shop by suspected kidnappers.
It was gathered that the missing boy's case had been reported to the Orile Police Division and a police signal had been sent across the state.
Speaking with SaharaReporters, the father, Kazeem Hamzat, explained that the incident happened when Abdul Qadri's mother was frying food in the shop.
She asked the boy and his elder sister to sit outside the shop to avoid smoke and smell.
He said, "We have not found him yet. When we talked with the police at the Orile division, they promised to send a signal to all the police stations across the state. We have been going around police stations, but we have not found him yet.
"He is only three years old. Since last Saturday, we have not found him. His mother was cooking inside the shop, and she asked him and his elder sister to leave where she was frying food because of the smoke and to sit just outside the shop.
"That was it. We suspect that someone took him away."
Last Thursday, panic gripped the Orile area after residents discovered a tunnel under the bridge which connects to Lagos Island. The tunnel was believed to be used by kidnappers and ritualists.
Residents who searched the tunnel saw several school pupils' uniforms, a generator set, an air conditioner and other house items.
The residents had caught one suspect, and instead of taking him to the police station, an angry mob had descended on him and beaten him to death.
The suspect, whose name had yet to be ascertained, was reportedly found roaming in the tunnel and was believed to be a suspected kidnapper.
Top Stories