An EFCC staff who was victimized by the former acting chairman of the agency has now become head of Academy. 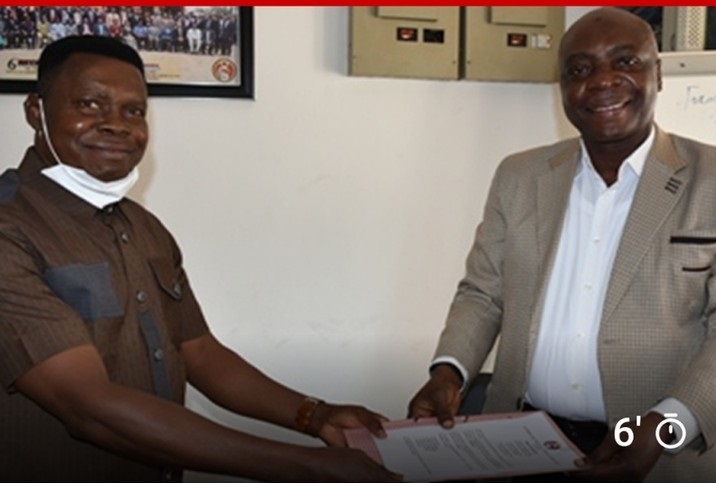 Ayo Olowonihi (Right) becomes EFCC head of Academy
A senior officer of the Economic and Financial Crimes Commission who suffered victimization in the hands of Ibrahim Magu, former Chairman of the Commission has now emerged as head of EFCC Academy.
According to Punch, Ayo Olowonihi, has now been appointed as the Commandant of the EFCC Academy.
Olowonihi, who was on Grade Level 17 was suspended by the then acting Chairman of the EFCC, Ibrahim Magu, in 2015 and then demoted to Grade 16 by Magu in 2017.
The aggrieved director subsequently instituted a case against the EFCC before the National Industrial Court.
According to court documents, Olowonihi said Magu had on November 19, 2015, summoned him to his office accusing him of being behind some damning online publications on the activities of the commission and against the person of the chairman.
He said on Magu’s directive, he was interrogated, his official computer taken away, while his two phones (MTN and GLO) were seized, adding that his office, after being thoroughly searched by a team of detectives and policemen, was sealed.
The plaintiff further stated that while interrogation was still on, Magu demoted him as commandant and redeployed him.
Olowonihi said while the letter was purported to have been issued by the management of the commission, he was not aware of any management meeting where such a decision was taken being a management staff.
The EFCC director won his case in court on February 26, 2019 but the EFCC under the leadership of Magu, filed an appeal.
The Court of Appeal in August 2020 affirmed the ruling of the lower court but by then, Magu had been suspended indefinitely by the President, Major General Muhammadu Buhari (retd.)
‌
On Monday, the EFCC said in a statement by its Spokesman, Mr. Wilson Uwujaren, that Olowonihi had been appointed as the head of the EFCC Academy.
A statement titled, ‘Olowonihi Takes Over at EFCC Academy’, read in part, “The acting Chairman of the EFCC, Mohammed Abba, has appointed Detective Commander Ayo Olowonihi as Commandant, EFCC Academy, Karu, Abuja.
“Olowonihi takes over from Itam Obono, a Deputy Commissioner of Police
“The appointment which is with immediate effect was consummated with a hand-over ceremony today, Monday, January 18, 2021, attended by both Olowonihi and Obono with heads of departments and units of the Academy in attendance.”
Obono charged Staff to give Olowonihi the best cooperation, stating, “I’ll ask that, Ayo who is coming is not new, he has been here before and the work will take speed. Give him the best cooperation. The little hurdles that are there, you may be able to surmount faster than we have done.”
In his response, Olowonihi appreciated Obono and wished him well at his new assignment. He pledged to take the Academy, which is the brain of the organisation, to where it should be.
Meanwhile, The PUNCH learnt that the new EFCC leadership had reversed several of Magu’s appointments while those close to the sacked EFCC boss have remained on suspension for the last six months pending the decision of the President to act on the report of the Justice Ayo Salami-led panel.
Top Stories