A bloody clash between IPOB's security organization and the Nigerian army has left people dead and properties destroyed. 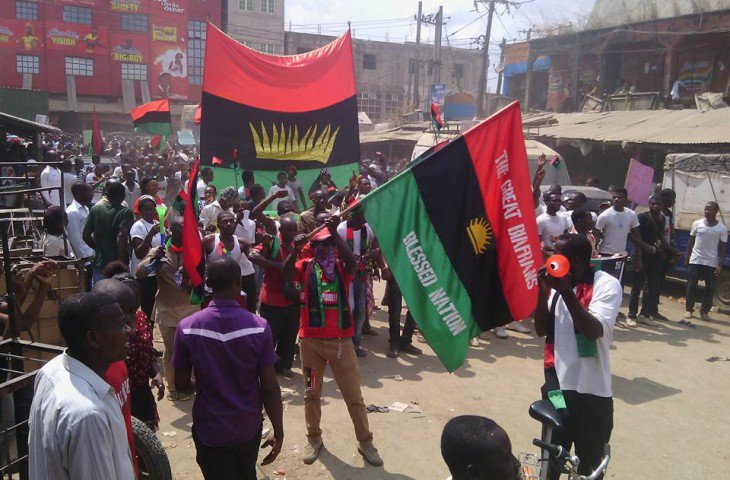 IPOB members
Houses and cars have been burnt and properties worth millions of naira destroyed after the Eastern Security Network, ESN of the Indigenous People of Biafra and the Nigerian army clashed in Orlu, Imo state.
It was also gathered that many lives were lost in the tragic incident.
Vanguard investigation revealed that the latest gun battle, yesterday, occurred at the Ogbosisi axis close to Banana junction in Orlu local Government Area when soldiers were said to be on their way for a revenge mission.
The crisis had been brewing since last week after a clash between ESN volunteers and police resulted in deaths.
Witnesses report said there were sporadic shooting and residents took cover to avoid stray bullets. The shooting was heard as far as neighbouring communities of Okporo, Akata and Umutanze.
The soldiers were said to be drawn from the 34 Artillery Brigade in Obinze. Military checkpoints have been erected on roads and travellers are being advised to avoid using Orlu road or moving at night.
The ESN had released a video, which went viral last week, showing its volunteers boasting how they dislodged security men who attacked them and displayed the vehicles the policemen had abandoned while escaping.
From Ogbosisi axis, the exchange of gun fire between ESN and security operatives spread into other parts of Orlu, and snowballed into what eyewitnesses told Vanguard became a war-like atmosphere.
At press time shops, houses and many other business premises were ablaze in the area.
However, villagers, business owners have fled and abandoned their homes. While hundreds of those on the run sustained varying degrees of injuries.
Meanwhile, Governor Hope Uzodimma has imposed a dust-to-dawn curfew in the affected areas and local councils in Imo Senatorial District to stop the crisis from escalating.
Uzodimma while briefing newsmen on the development said it was part of the safety measures to restore normalcy in the affected areas.
He also ordered for a 24 hour patrol by the security operatives in the local government areas under the curfew. They include Orlu, Orsu, Isu-Njaba, Nwangele, Oru East, Nkwere  Ideato North and Ideato South.
Reacting, the Igbo National Council, INC, pleaded that the military should be redeployed out of Orlu.
“The Igbo National Council (INC) Worldwide have keenly observed the tempo of the joint military campaign going on in Orlu Local Government Area of Imo State which have lasted over four days and have claimed many lives.
“The military is said to be revenging for the dead of their Comrades who was alleged to have been killed by members of the Eastern Security Network (ESN) set-up by the Mazi Nnamdi Kanu led Indigenous People of Biafra (IPOB).
“In view of the above, we call on the Executive Governor of Imo State – Senator Hope Uzodinma to quickly intervene on the ongoing violent conflict between the Nigerian Military and the Eastern Security Network (ESN) so as to halt the wanton destruction of lives and properties of the people of the area.
“It may not be to the best interest of the Imo State and Federal Government of Nigeria to militarize any part of the Igbo Nation in disguise of fighting pro-Biafra agitators.
“We note that the Nigerian Police have the capacity to tackle criminalities in any part of Nigeria if well mobilized and given free hand to operate.
“Finally, we urge the Federal Government of Nigeria to immediately redeploy these soldiers ravaging Orlu Communities and send them to the various highways where the Fulani herdsmen are presently terrorizing, raping and killing Nigerians. We fear that if the ongoing violent conflict is not quickly resolved, it might escalate to other communities in Imo State,” it said in a statement.
Top Stories