Thirteen suspected internet fraudsters have been apprehended by operatives of the Economic and Financial Crimes Commission.

The suspected yahoo boys
13 young Nigerian men suspected to be internet fraudsters have been arrested by the Economic and Financial Crimes Commission (EFCC), Ibadan zonal office.
The suspected fraudsters were arrested in Ibadan, the Oyo State capital.
In a statement released, on Tuesday, the EFCC said the arrest was effected following intelligence reports detailing the suspect’s alleged involvement in internet fraud and other related offences.
Four cars, phones, laptops and other incriminating documents used in perpetrating the crime were recovered from the 13 suspects.
The suspects are Kayode Adeoye, Ogunleye Yemi, Adio Taheed, Olaniyi Joshua, AbdulAfeez Kehinde. Others are Bakare Omolayo, Adesuntola Adebayo, Ridwan Gbolahan, Abdulfatai Waliu, Olayiwola Olamilekan, Raji Wasiu, Olawale Ibrahim and Tajudeen Mojeed.
The commission said the suspects will be charged to court as soon as investigations are concluded. 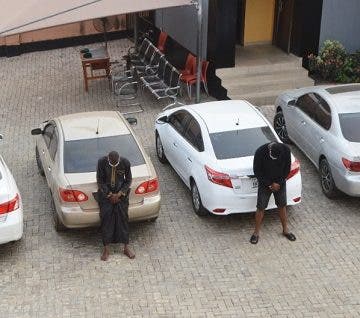