The photographer narrated his horrible experience with police officials who brutalized him despite finding nothing incriminating on him. 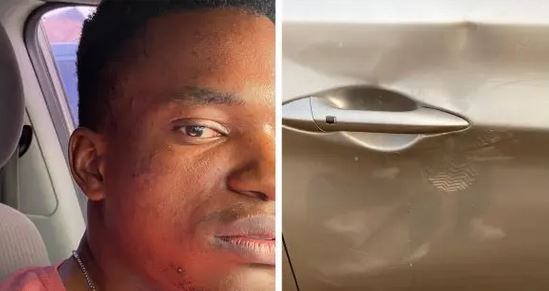 An Ibadan based photographer took to Twitter to narrate how he was physically assaulted by police officials in an unlicensed bus.

According to the man identified as Victor, he was driving from the University of Ibadan to an area called Vine Branch when he noticed the vehicle trailing him.

Thinking they might have been armed robbers, he sped off and they pursued only to later catch up with him and started harassing him.

His pleas to them explaining he is a photographer fell on deaf ears.

He was eventually whisked off in their bus, and later released but not until after when he had been thoroughly beaten by the officers.

"I was heading from University of Ibadan to Vine branch area to give a Camera lens to a friend. I was along Agodi road when I realized there was a white bus with no police tag following me bumper to bumper.

My normal security senses prompted me to speed off and give a distance ensuring the bus did not see a chance to overtake and double cross. They could be robbers

Right along the vine branch road I decided to slow down and the next thing is the bus double crossed , with about 6 men jumping out of the vehicle . I just realized they may have been the police after I saw about 2 of the 6 men in uniforms .

They rushed at my vehicle and hit it with intentions to break in. I unlocked the vehicle, got down and the next thing is one rushed at me and slapped me on both sides of my face

I was so confused. What did I do?. One exclaimed “Why are you running?”

I am running because an unknown white vehicle is chasing me ! Damn it ! Do you think I will not stop if police was written on the bus?!
These guys threw me in the bus and two supposed officers without uniform got into my vehicle.

They took my phones and started asking questions. I was asked to unlock my phones.

They turned around and headed towards Jericho . I practically told them the whole story of my life even down to where my parents worked . I told them I just finished from UI, I told them I am a photographer and they believed nothing.

One asked how many accounts I got ,another asked for my Gmail. They even asked how I came about the money to purchase my vehicle. What the hell?!!!! After searching through the trip and they found nothing . They parked both vehicles in front of DStv office Jericho

The so called “Head of Operation” looked at me and said “Say the truth now or we will go and run your phone through forensics!” . I told them there’s nothing else to say after I have said nothing but the truth. They handed my license and ID cards to me and asked me to go"

I was heading from University of Ibadan to Vine branch area to give a Camera lens to a friend. I was along Agodi road when I realized there was a white bus with no police tag following me bumper to bumper. https://t.co/g5mJrHA0MX