Former Nigerian international, John Utaka has been given a top job as a coach in Europe. 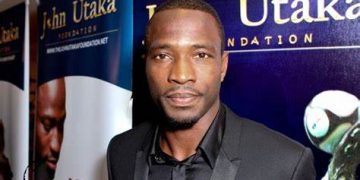 John Utaka
A former Super Eagles star, John Chukwudi Utaka is now the interim head coach of the Montpellier Feminines.
The 39-year old is taking over from Senegal’s Frédéric Mendy who was sacked recently due poor run of results.
Utaka will be assisted by Frenchman Baptiste Merle and Sports Director Jean-Louis Saez.
Utaka played for Montpellier from January 2011 to July 2013 where he won the French Ligue 1 in his first season at the club.
The 39-year-old returned to the club in May 2020 after being appointed as a youth team coach.
He has a real opportunity to show what he is made up of as one of the few African coaches in charge of a European club.
Montpellier are ranked 6th on the league log with 27 points from 19 games this season in the French Women’s League.
Top Stories