FX Crisis: How I And Sanusi Stabilised The Naira For Five Years – CBN Ex-Deputy Gov, Moghalu


Moghalu, who was a deputy governor at the apex bank between 2009 and 2014, made this known in a PUNCH Live Interview on Thursday. 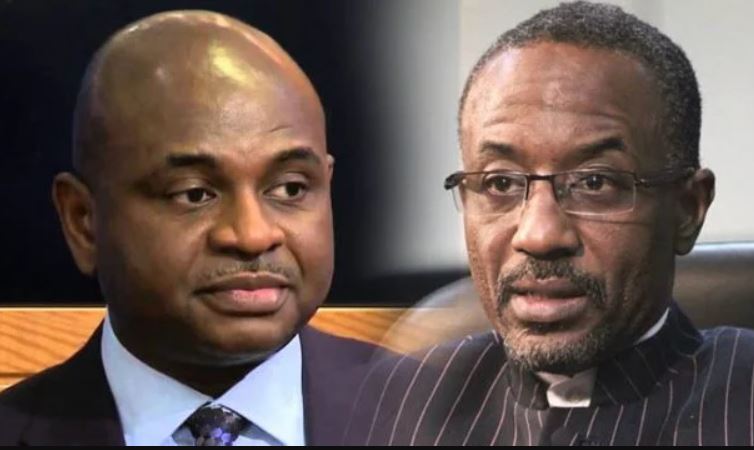 Kingsley Moghalu, a former Deputy Governor of the Central Bank of Nigeria, has explained how the apex bank stabilised the naira against the dollar for five years from 2009 to 2014.

Moghalu, who was a deputy governor at the apex bank between 2009 and 2014, made this known in a PUNCH Live Interview on Thursday.

During his time at the apex bank, Moghalu deputised Sanusi Lamido Sanusi, who was CBN Governor from June 2009 to February 2014.

Both Sanusi and Moghalu were at the apex bank during the administrations of the late President Umaru Yar’adua and then-President Goodluck Jonathan.

During the period, the naira steadied around N150/$1. However, the naira has maintained an unprecedented downward trend in the last six years since the beginning of the administration of the current President, Major General Muhammadu Buhari (retd.), and the CBN Governor, Godwin Emefiele.

The naira now trades at N570/dollar at the parallel market while it trades around N412/$ at the I&E forex window which is the only official rate recognised by the CBN.

The downward trend of the naira had fueled calls for the sacking or resignation of Emefiele by some political groups including the Peoples Democratic Party. They blamed Emefiele, who has been CBN governor since June 2014, for poor monetary policies.

However, speaking on Thursday, Moghalu blamed the downward trend of the naira on the activities of speculators and lack of autonomy of the apex bank.

When asked how he and Sanusi stabilised the naira against the dollar for years, Moghalu told PUNCH Live that the apex bank worked on investors’ confidence during the period.

He said, “We worked very hard on the matter of the exchange rate because we wanted to create a very investment-friendly climate for both local and foreign investors in the Nigerian economy and we knew that one of the keys to that was an exchange rate that was stable.

“So, we made sure that you could bring in your money for investment in Nigeria and take it out, 100 per cent, it’s yours, with no real complications, that gave investors’ confidence.

“We, of course, had high oil prices at that time which also was helpful. So, the reserves were never really above the early 40s, in terms of billions of dollars.

“It was just the way we managed the Central Bank’s own responsibilities in the economy in general – the banking reforms that we did; we really cleaned out the system, we stabilised it and we opened it up for business.

“We laid the foundation for the fintech boom that we are enjoying today. We introduced a lot of payment system innovations like the Bank Verification Number when I was deputy governor of operations and responsible for the payment system reforms.

“It’s a whole set of factors that contributed to our success.”

The ex-deputy governor of the apex bank lamented that the CBN has lost its autonomy to the political class and has little or no investors’ confidence.

According to the former presidential candidate of the Young Progressive Party in the 2019 election, the government of the day does not respect the independence of the CBN and it becomes a choice for whoever is the governor whether to play along or assert his or her independence and bear whatever cost given the kinds of political leaders that are in the country.

“There was confidence in the Central Bank during my tenure as deputy governor of the bank. I am not sure it is the same today and there are many reasons for that; one of the reasons is that a Central Bank should endeavour to maintain its autonomy.

“We maintained our independence scrupulously; we did not allow politicians to give us instructions about how to run the bank,” he added.

Continuing, Moghalu said that by pumping more forex into the market, the CBN is depleting the foreign reserves of the government, noting that economic diversification and exportation were the way out of the FX crisis in the country.