The angry youths set up bonfires on the road which prevented the free flow of vehicular movement. 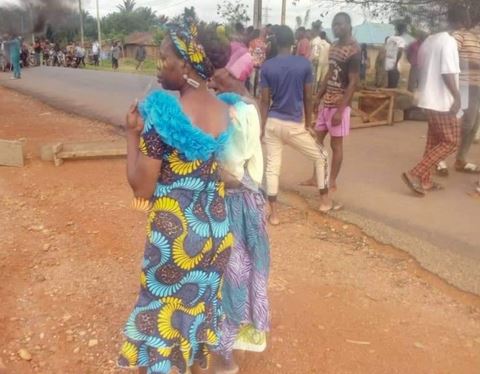 Some angry youths barricaded the busy Osogbo-Ilesa road while protesting the knocking down of three children by a vehicle in Kajola town, Osun state.

Eyewitnesses said that the angry youths had set up bonfires on the road which prevented the free flow of vehicular movement.

Akeem Saliu, an eyewitness, disclosed that the accident occurred when the children, two boys and a girl of the same parents, were knocked down by a private vehicle on the busy road on their way to school.

He explained that immediately after the accident occurred, the driver of the vehicle alighted and rushed the victims to a nearby hospital.

Of the three victims, one has been resuscitated and the others are yet to regain their consciousness as at press time.

As a consequence of the barricade, motorists and commuters have experienced difficulty plying the road.

The spokesperson of the Federal Roads Safety Commission (FRSC), Osun Sector Command, Agnes Ogungbemi, told this medium that she was aware of the accident but added that the first responders to the scene of the accident were the personnel of the Nigeria Police Force post at Kajola.

The Public Relations department of the Osun Police Command also revealed that they were yet to be fully briefed of the development and promised to get back to our reporter as soon as possible.