Ex-Naval Director On Wanted List For Corruption Sneaks Back Into Nigeria, Assaults Woman With Military Protection


The anti-graft agency had accused Yusuf of stealing N2 billion belonging to the Nigerian government while serving as Director of Nigerian Navy Accounts. 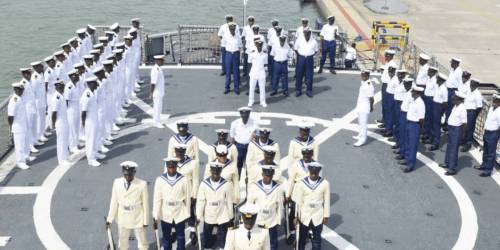 Even though he has been on the run after being declared wanted by the Economic and Financial Crimes Commission (EFCC) for alleged N2 billion corruption, a former Director of Navy Accounts, Rear Admiral, Tahir Yusuf (retd.) during the week used military operatives to assault the manager of a bakery in Zaria, Kaduna State, according to a report by SaharaReporters.

The anti-graft agency had accused Yusuf of stealing N2 billion belonging to the Nigerian government while serving as Director of Nigerian Navy Accounts.

In 2020, Justice Ijeoma Ojukwu of a Federal High Court in Abuja ordered the permanent forfeiture of about N500 million found to be fraudulently amassed by the military officer to the Nigerian government.

Following the forfeiture, SaharaReporters gathered that Yusuf fled Nigeria to Dubai, UAE where he has stayed for over 3 years.

However, Yusuf sneaked back to the country last week with the help of some corrupt government officials, mainly in the military through Niger Republic, multiple sources told SaharaReporters.

The sources added that the fugitive has been moving round the country with military guards provided by the Navy authorities.

It was gathered that Yusuf also used armed naval officers to assault the manager of Bitmas Bakery Limited in Zaria.

The bakery is said to be owned by the retired admiral’s wife.

“When the EFCC was on to him, he exiled himself to Dubai, UAE where he stayed for 3/4 years. He reached out to the EFCC through his younger brother, Abdulbari Yusuf, who is a banker with Zenith Bank, Maiduguri branch,” one of the sources said.

“He has compromised many EFCC operatives including the Director Operations, Abdulkarim Chuckol. He has made arrangements with them to bury his case.

“Now with the help of many corrupt government officials, mainly in the military, he sneaked back into the country last week through Niger Republic.

“They were however apprehended by the police and charged to court. The admiral now came back to Zaria, facilitated their release and went back to the bakery and continued to assault them. The bakery has about 140 workers, all have been rendered jobless now.”

Yusuf was sighted at one of his choice properties located at 1B Yobe Close, Maitama, Abuja during the week.