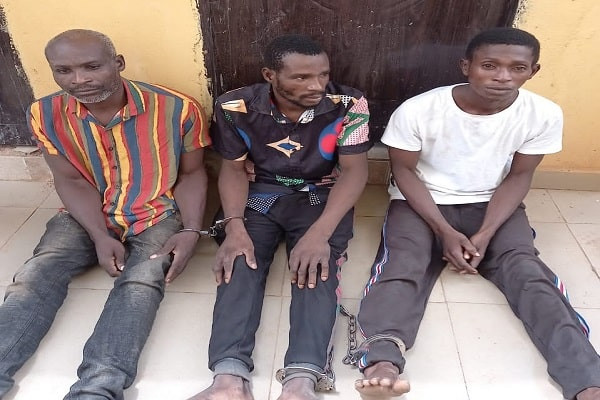 The security guard (left) with the others

The men of the Edo State Police Command have arrested one Best Abarawe, a security guard who conspired with a kidnap gang to abduct top employees of the firm where he works in Benin City.

The suspects who have been on the police wanted list were alleged to have engaged in multiple kidnappings in the state including attacks on several operators of sand excavation firms popularly called ” Burrow Pit”.

It was gathered that Abarawe used his relationship with the organization to get first-hand information about the big wig employees and then recruited the kidnappers to abduct them for ransom.

According to crime correspondent, Festus Alenkhe, the security guard took them to the company where they surveyed the environment before kidnapping the manager, Mr Kingsley Osazuwa.

The victim was taken through Ikpoba River on Benin-Agbor road in Edo state to an unknown destination.

The abductors established communication with the family, demanding N10 million. After severe negotiation, the company parted with N3.5 million to effect his release.

Similarly, on the 20th July 2021, the suspects also stormed another sand excavation firm in Benin city where one Mr Ehikioya was kidnapped.

The victim was also taken through Ikpoba River to an unknown destination where they opened ransom negotiation. The man was released after the suspects collected an unknown ransom.

On 24th July 2021, the suspects invaded another Burrow pit in Benin city and kidnapped the Director, who was whisked through Ikpe river to a creek in Delta state.

But trouble started after the security guard who gave the kidnapping information felt cheated from the money collected from the victims leading to a fallout.

Abarawe who later escaped to Warri in Delta state was first arrested by men of the Edo state police command’s Anti-Kidnapping and Cyber Crime unit. He then named other members of the gang who were immediately arrested by detectives.

One of the suspects, Jacob Goto, told Standard Gazette that he escaped from Prison in October 2020 after the cells were forced open during the ENDSARS protest in Benin city.

"I was in the Sapele road prison in Benin city. When I came out, a guy called me that there were some persons in the Burrow pits that had money and said we should kidnap them. We monitored them and kidnapped some of them. I was previously imprisoned for kidnapping and armed robbery too." he added.

Spokesperon of the command, SP Bello Kontongs, who confirmed the arrest assured that the police will arrest other members of the gang now at large.

"The police in Edo state will not allow kidnappers and other criminals to take over the public space without arrest" he stated.