The security operatives stormed the community in five Toyota Sienna vehicles and shot at the youth on the allegation that they sealed off a Lebanese quarry company, Conrock. 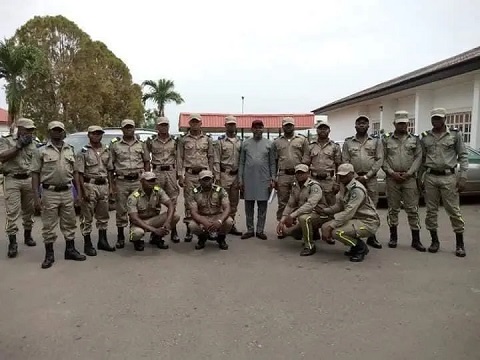 At least four persons have lost their lives after members of the South-Eastern Security Outfit, Ebubeagu, invaded Amasiri community.

According to Punch, other yet-to-be-identified victims, who sustained injuries during the invasion and were rushed to hospital for treatment, were reportedly arrested and taken away.

The security operatives stormed the community in five Toyota Sienna vehicles and shot at the youth on the allegation that they sealed off a Lebanese quarry company, Conrock.

According to a source, the youth had assembled at the square to share money given to them by the management of the company for unsealing its property when the operatives arrived.

The source said, “We were expected to appear before the area command and the police division on Monday (today) and Tuesday before Ebubeagu came and started shooting at us for arguing with them. We told them we had reached an agreement with the company and that we had unsealed the company.

“Their management even gave us something in appreciation for our peaceful conduct. So, we are at a loss as to why Ebubeagu came and shot some of us. One of the victims died on the way to a hospital, while two others died while receiving treatment.”

Another source explained that the youth, prior to sealing the company, had accused the management of foot-dragging on the rehabilitation of a four-kilometre road in Amaebor and the naming of the Community Liaison Officer.

The source said, “Some of those injured were taken by security men from the hospital to Abakaliki. Yesterday (Sunday), they came and were chasing and firing sporadically when a stray bullet hit another youth, who died immediately.

“We know that the Ebubeagu operatives were invited by politicians because they want the CLO to be appointed from another village in Ohaechara instead of Amaebor that the post is zoned to.”

Efforts to speak with the Amasiri Commander of Ebubeagu, Paul Agbii, and the Amaebor Youth Leader, Uka Eze, were abortive, as their telephone lines were switched off.

The state Police Public Relations Officer, Loveth Odah, said she did not have details of the incident.

“I spoke to the DPO and he said the matter was reported to the headquarters, but I have yet to get the person investigating the matter since it was the weekend,” she said.

But the consultant to the state government on security and Coordinator of Ebubeagu, Stanley Okoro, said the fatalities occured after the youth of the community engaged the security outfit in a shootout.

Okoro said, “The youth there stopped the quarry from operating. The council chairman went there to beg, but they refused all her pleadings.

“When Ebubeagu got there, the youth opened fire on them. It was their leader’s bullet that killed one of them. But he has been arrested by security agencies.”