“I’m Broke, Need My N10m Back” – Jaruma To Regina Daniels and Her Mom (Video)


Jaruma has taken to her social media page to demand her N10 million back from actress Regina Daniels. 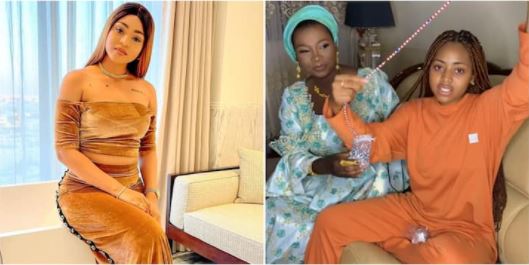 Jaruma and Regina Daniels
Kayanmata seller, Jaruma has begged actress, Regina Daniels to return her N10 million after she failed to honour their agreement.
This comes after she shared copies of her unsigned agreement with the actress.
Recall that this saga ensued after Regina Daniels publicly broke ties with Jaruma, while stating that she has never used Kayanmata products, rather her posts about Jaruma was due to the pay she received from her.
She also expressed disgust over the fact that Jaruma still tried to use her platform to advertise her products even after the deal expired.
Jaruma in response to this revealed that she paid Regina Daniels the sum of N10M for brand influencing, but what she did wasn’t commensurate with the amount she was given.
In a bid to further prove her story, she has released a document pertaining to the agreement which Regina Daniels and her mother, Rita refused to sign.
Captioning the post, she wrote:
“We say again that after the pictures & videos, we did not take back Jaruma Products so we will be so grateful if the products can be returned back to Jaruma 🙏 The first contract they did not sign because they asked for corrections to be made. We made the corrections and sent them. They ok okayed 👍 the contract & they started working without signing the contract”
Watch video below:
Top Stories