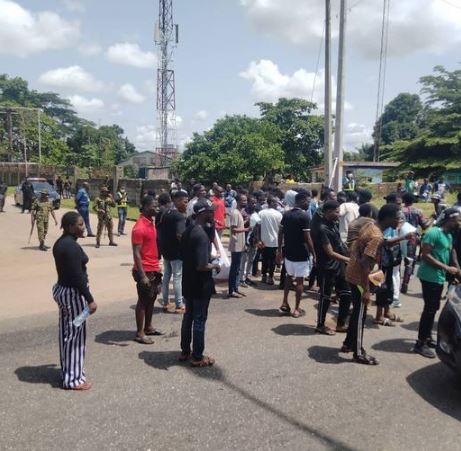 Following the extension of the ongoing ASUU strike by three months, the National Association of Nigerian Students on Monday disclosed that it would block the national assembly, federal roads and airports in the country.

NANS President, Sunday Asefon, in a statement, condemned the inaction of the regime of President Muhammadu Buhari, over the industrial action which started on February 14, 2022.

Asefon affirmed that students of public universities would disrupt primary elections and conventions by political parties scheduled for May ending.

TORI  had earlier reported that ASUU, led by Prof. Emmanuel Osodeke, on Monday, ended its ongoing strike for another 12 weeks to give the Federal Government time to resolve all the outstanding issues.

The union said its fresh industrial action came on the heels of the government’s failure to satisfactorily implement the Memorandum of Action it signed with the Union in December 2020 on renegotiation of the 2009 FGN/ASUU Agreement, deployment of the University Transparency and Accountability Solution, Earned Academic Allowances, funding for revitalisation of public universities, withheld salaries, amongst others.

The statement was titled, ‘ASUU Strike Extension: The silence of the Government and the ruling class; the nation must feel the heat’.

The statement by Asefon partly read, “Having exhausted all window of constructive engagement with the government. I, on behalf of the national leadership of NANS therefore declare National Action from May 10, 2023.

“The National Actions is tagged ‘Operation Test Run’ and shall be held in all the 36 states of the Federation. Federal roads across the 36 states shall be occupied for a minimum of three hours daily. The Operation shall be a precursor to a total shutdown that will be decided during our Senate meeting/pre-convention on Saturday 14th May 2022.

“Our proposal to congress on the 14th shall be total blockage of the airport roads across the country and total disruption of political party primaries, blockage of the national assembly until they are committed to passing legislation banning public office holders from sending their children to university abroad.

“By this release, all JCC Chairmen, Zonal Leaderships and stakeholders are directed to act appropriately and ensure total compliance to the directive of ‘Operation Test Run’ shut down the federal roads in your State, the nation must feel the heat.”

NANS had earlier threatened fire and brimstone, censuring the Federal Government for abandoning students of public universities but politicians including current ministers have shunned the striking lecturers and protesting students.

But amid the strike, Minister of State for Education, Emeka Nwajiuba; as well as Minister of Labour and Employment, Chris Ngige; both of the ruling All Progressives Congress recently picked up the party’s N100m presidential nomination and expression of interest forms each while lecture rooms remained shut for about three months this year.

Students of public universities had also been at home for nine straight months in 2020 when ASUU and the Federal Government had a face-off over unpaid areas, choice of payment platforms, amongst other contentious issues.