According to Otobo, Apostle Suleman told Twitter that she posted the pictures without his consent, hence the need to delete the post. 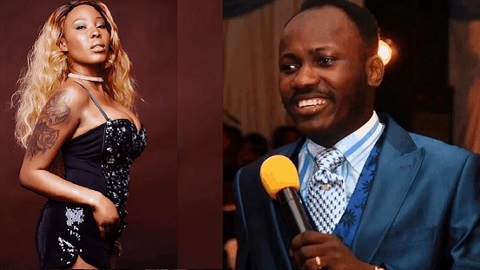 Controversial Canadian singer, Stephanie Otobo has made another damning allegation against the person of Apostle Johnson Suleman of the Omoge Fire Ministries.
This time around, she alleged that the man of God uses church money to sleep with members.
Recall we had reported earlier how the Canada-based lady shared what she claimed is the Apostle's priv#te photos.
According to her, the photos were taken during one of their intimate moments.
Otobo disclosed further that her Instagram account is currently under attack, claiming that Apostle Suleman is behind it.
The singer made a heated allegation, claiming that the cleric uses his church members offering and tithes to sleeping with them.
Otobo in series of post on her Twitter account wrote, “Apostle suleman afa? See your life? You went to report the n#de image that it’s yours. You claimed it to be yours and told twitter team that i uploaded iy without your consent 🤣wether you like it or not, your prick is in the world wide web. Come to court and prove your innocence
“We’re back… Twitter isn’t Instagram that deletes account over night. Meanwhile, they won’t allow me to post n*de no more.. Make dem no go delete my account abeg o. So y’all calm down, let’s use sense to k*ll the rat inside the calabash. I’ll be posting some receipts today.
“My iG is under attack 🤣Y’all should understand that I’m f*ghting a Nigerian billionaire fake religious comrade who is influential in Nigeria and has built wealth from gullible religious people and these are the same people defending him online. Some are beginning to have sense.
“If you like, use your money, as usual, to pay your tech squad to bring down my IG account, I move still. As far as you can’t k*ll me, I’ll keep exposing you. y’all ignorant religious bigots, your tithe, seeds and offerings are what he uses in paying us for s#x. 🤣Don’t have sense o.
“God has given me the strength to withstand you. I’m that woman in the bible, who was looked down on bcos of her dress but was blessed by Jesus. Prepare for vawulens Mr God approves of my mission and he’s proud of me. Using me to unveil the deceit in African churches.The fake prophet.”
Top Stories