The suspects were arrested in a chain of a tactical sweep operation by the Command’s Anti-Narcotic unit at different Black spots within the territory following the heels of actionable intelligence. 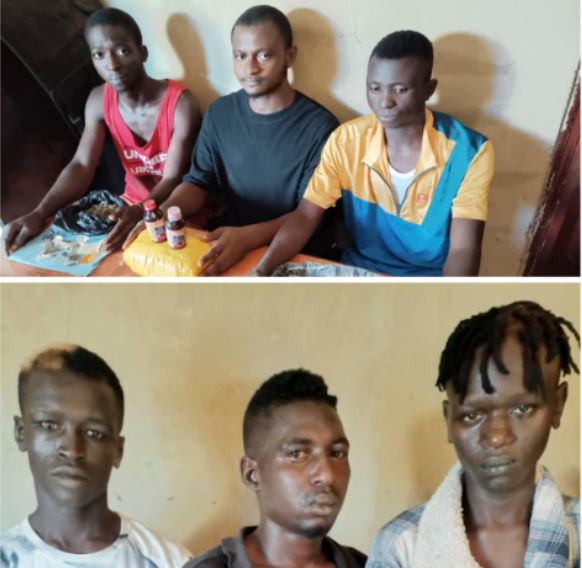 During the arrest, large quantities of prohibited substances was recovered from them.

Spokesperson of the command, Josephine Adeh, who disclosed this in a statement on Wednesday, listed the names of the suspects as Suleiman Adulrahman Bello,27, Jonathan Joseph, 35, Suleiman Shamsudeen, 22, Emeka Offor, 29,Tanko Abdullahi,20, and Luka Ishiaku,25.

The suspects were arrested in a chain of a tactical sweep operation by the Command’s Anti-Narcotic unit at different Black spots within the territory following the heels of actionable intelligence.

"Upon the arrest, the suspects were found in possession of large quantities of dry leaves suspected to be Cannabis sativa of different variants like Laud, Arizona, Crack Cocaine, and bottles of Codeine syrup. When interviewed, the suspects stated that they have been in the peddling business for quite a while." the statement read.

"The investigation has been intensified to unravel other groundbreaking revelations that could lead to more arrests, while the suspects have been handed over to the National Drug Law Enforcement Agency (NDLEA)

"The FCT Commissioner of Police CP Babaji Sunday psc while frowning at the rate of moral decadence In the society, noted that crime variants are degenerates of or catalyzed by drug/substance abuse and poor upbringing, he, therefore, called on all at the apex of religious and societal spheres of influence to maximize their platforms to preach against drug/substance abuse and other deviant behaviours.