The students on a joint protest are from Olabisi Onabanjo University, Ago Iwoye; Tai Solarin University of Education, and the Federal University Of Agriculture, Abeokuta, all in Ogun State. 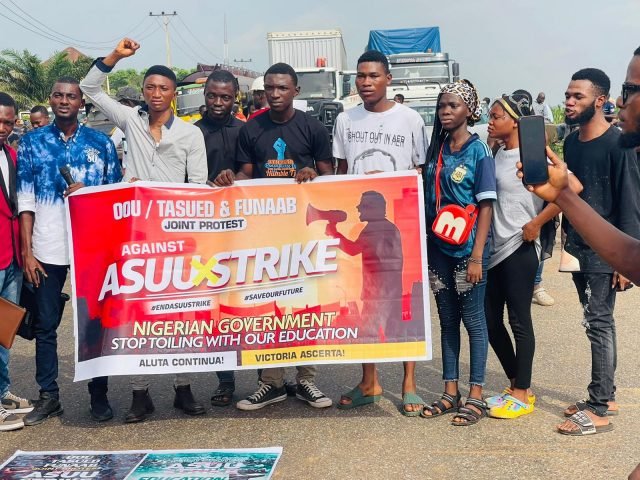 University students have reportedly blocked the Sagamu-Benin-Ore highway on Monday.
According to Punch, the university students are protesting the lingering strike action of the Academic Staff Union of Universities.
The students on a joint protest are from Olabisi Onabanjo University, Ago Iwoye; Tai Solarin University of Education, and the Federal University Of Agriculture, Abeokuta, all in Ogun State.
They bore on their banner, “Stop Toying with Our Education,” as they marched on the road in protest.
Commenting on their action, the TASUED Students’ Union President, Sharon Great, said, “We have all come here today to shut down the Benin-Ore Expressway so as to make our demands met by the Federal Government and to also pass a message to the state governments.
“Nigerian universities need proper funding. It is the responsibility of the FG and state government to bring about a viable educational system. That is why we have gathered here today to show that our demands must be met by the Federal Government.
According to Sharon, I am in solidarity with ASUU, their demands are genuine. If the FG can’t hold down the salaries of political office holders, why would they hold down the salaries of lecturers who work to mold Nigerian future leaders?
“ASUU strike must end!” He said.
The PUNCH had reported that ASUU, alongside the Joint Action Committee of the Non-Academic Staff Union of Educational and Associated Institutions and Senior Staff Association of Nigerian Universities has said the Federal Government did not reach a strong agreement with them that can lead to calling off the industrial actions.
ASUU started its strike on February 14, 2022, making it 91 days today.
ASUU, NASU, and SSANU embarked on industrial actions while demanding improved welfare packages, better working conditions, and the implementation of various labour agreements signed with the Federal Government between 2009 and 2020.
Top Stories