He described the President Muhammadu Buhari-led government as a criminal enterprise engaging in genocide and crimes against Biafrans and other ethnic or political groups. 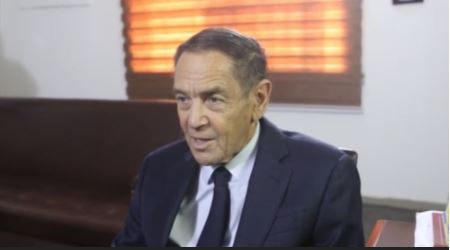 It has been revealed that Bruce Fein, International counsel and spokesperson for Nnamdi Kanu, leader of the Indigenous People of Biafra (IPOB), has asked the popular social media platform, Facebook, to ban the Nigerian government.

He described the President Muhammadu Buhari-led government as a criminal enterprise engaging in genocide and crimes against Biafrans and other ethnic or political groups.

It also asked Facebook to rebuke the government for seeking censorship of IPOB's free speech.

Fein made the appeals in a letter dated May 18, addressed to Mark Zuckerberg, Co-founder of the social media website Facebook and its parent company Meta Platforms (formerly Facebook, Inc.).

The American media magnate is also the chairman, chief executive officer, and controlling shareholder of the company.

Fein's letter obtained by SaharaReporters on Wednesday, reads, "I represent the Indigenous People of Biafra (IPOB) and its leader Nnamdi Kanu. For more than a century, Biafrans have been denied their international law right to self-determination, i.e., government by the consent of the governed, successively by the United Kingdom and the radical

"The proscription flouted due process. IPOB was denied notice and an opportunity to respond. The proscription was the fact-free ipse dixit of Nigerian President Muhammadu Buhari. Despite Nigeria’s hectoring for more than four years, no other country in the world has proscribed IPOB, including the United States and the UK. Indeed, five human rights experts of the United Nations

Human Rights Council wrote President Buhari in October 2020, asking for evidence that IPOB was complicit in terrorism. They were ignored. "Meanwhile, President Buhari threatened a reprise of the 1967-1970 genocide of Biafrans if IPOB did not surrender their right to self-determination under Article 1 of the International Covenant on Civil and Political Rights and otherwise.

"Accordingly, I am respectfully requesting that Facebook rebuke the Fulani-controlled Government of Nigeria for seeking censorship of IPOB’s free speech. Facebook should also consider banning the Government of Nigeria as a criminal enterprise featuring genocide and crimes against humanity against Biafrans and other ethnic or political groups. The incriminating evidence is voluminous and will be supplied on request."

The Nigerian Government on Tuesday asked Facebook and other social media platforms to stop allowing IPOB to use their platforms to allegedly incite violence and provoke ethnic hatred in the country.

The government said it was unjustifiable for any social media platform to provide a medium for IPOB, which had been proscribed and classified as a terrorist organisation.

President Buhari banned Twitter operations in Nigeria from June 5, 2021, to January 13, 2022, accusing it of threatening the country’s corporate existence.