This was made known in a flyer released by All Yoruba Self Determination Groups and Media In Diaspora. 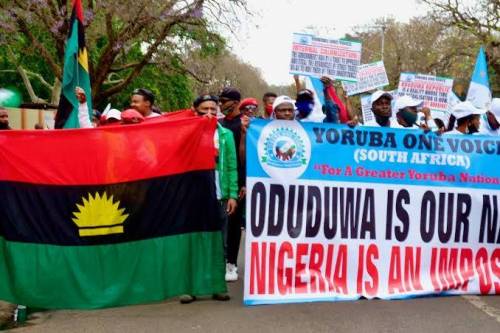 Yoruba Nation agitators have announced they will be holding a mega rally in the United States to protest against the Nigerian government.
According to Sahara Reporters, a flyer released by All Yoruba Self Determination Groups and Media In Diaspora, a group agitating for the actualisation of the Yoruba Republic stated that the rally will be held at the US Department of State 2201 C St NW. Washington DC 20520 on the 9th of June, 2022.
The rally is to call for the actualisation of Yoruba sovereign state and the release of Nnamdi Kanu, leader of the Indigenous People of Biafra (IPOB) by the Nigerian Government.
Kanu, a British-Nigerian political activist who advocates for the secession and independence of Biafra from Nigeria, has been detained since June 2021 by Nigeria’s secret police, Department of State Services (DSS) following his rendition to Nigeria from Kenya.
SaharaReporters earlier reported that the trial of Kanu resumed on Wednesday at the Federal High Court in Abuja.
The court authorities dismissed some of the stringent conditions surrounding Kanu's trial and ordered that Kanu should be allowed to watch football matches.
Top Stories