2023: I Am Shocked – Anyim Reacts After Losing PDP Presidential Primaries


Anyim, a former Secretary to the Government of the Federation (SGF) got a paltry 14 votes. 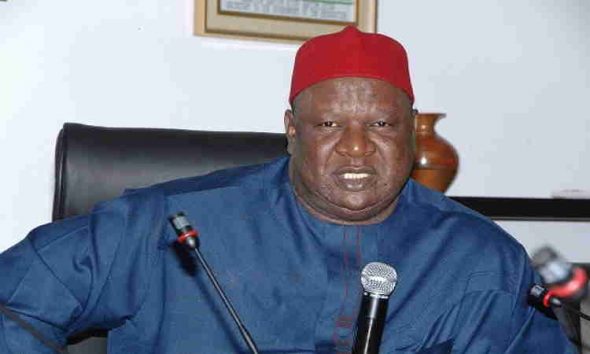 A former Senate President Anyim Pius Anyim has revealed that he's still in shock after losing at the presidential primaries of the Peoples Democratic Party (PDP) held in Abuja on Saturday.
Anyim got a paltry 14 votes from delegates.
Recall that we had reported that Atiku Abubakar got the party's ticket with 371 votes.
He scored a total of 14 votes at the primaries.
Reacting to the outcome of the PDP presidential primaries, Anyim said in a statement that he was proud to have gone through the process but was shocked about how the delegates voted.
He accused the delegates of ignoring candidates who preferred solutions for national issues but instead chose to vote based on sentiments.
“I’m proud to have gone through the race to the end. However, I am shocked that consideration for voting the PDP presidential candidate was not based on burning national issues and how to resolve them, but still on the old primordial sentiments,” he said.
“It appears doubtful if our search for nationhood is yielding any results,” he added.
The aspirant was however full of praises for the organizers of the PDP primaries, commending them for doing a great job in planning and execution.
“I must sincerely commend the PDP 2022 Special Convention Committee for doing a great job,” he said.
The former Senate President also appreciated his supporters and congratulated Atiku for emerging victorious.
“I deeply appreciate and thank all those who stood by me throughout this race, especially those that voted for me at the primary election. I want to assure all of you that we shall continue to stand tall until we birth the Nigeria of our collective dreams.”
Top Stories