The gang had been duping people from other Asian countries as well, Deputy Commissioner of Police (Central) Shweta Chauhan said. 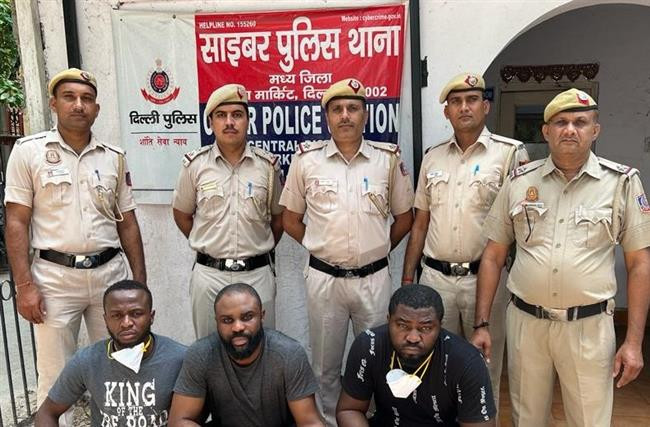 As many as three Nigerian nationals have been arrested in India, according to The Times of India.

They were arrested for allegedly cheating over 1,000 people of several crores of rupees in the last eight years via matrimonial sites and social media platforms, Delhi Police said on Monday, May 30, 2022.

The accused have been identified as Paul Onyeji Atuh, Samuel Aniagor and Charles Pous Chukwuebuka.

The gang had been duping people from other Asian countries as well, Deputy Commissioner of Police (Central) Shweta Chauhan said.

The matter came to light after a resident of Central Delhi filed a complaint on the National Cyber Crime Portal stating that she had been duped of ? 55,900.

According to the complainant, she came in a touch with a person on a matrimonial site. He introduced himself as Ankit Verma and that he was a doctor based out of Canada. They exchanged phone numbers and started talking to each other on WhatsApp, Chauhan said.

On December 22 2021, the person told the complainant that he had arrived at the Indira Gandhi International Airport, but the customs officers had held him for carrying a huge amount of Canadian dollars.

"Then, a lady called the complainant from another mobile number and told her that Verma had been taken into custody at the airport and that they needed to pay ? 55,900 to get him released.

"The complainant transferred the money in two instalments to the bank account provided by the lady," the DCP said.

"The lady further raised a demand for ? 1,50,000 saying the money was needed to obtain clearance from the Ministry of Finance. This is when the complainant sensed something fishy and refused to pay further," Chauhan said.

During the investigation, the police found that a large number of transactions were done from the account to which the complainant had transferred the money, she said.

"Details of banks accounts were collected from various banks. The teams collected the CCTV footage of ATMs from where the money was withdrawn. CDR analysis of mobile phones was also done," the officer said.

During interrogation, the accused disclosed that they created fake profiles on various matrimonial sites and social media platforms to cheat people, Chauhan said.

The DCP said the accused used to win over their targets by telling them that they had either sent gifts or they were flying down for a meet.

"They also used to create dummy parcel tracking receipts. After three to four days, one of their gang members used to call the targets impersonating as a customs officer or an airport authority officer," she said.

"The accused would then tell that there are dollars or pounds in the parcel and the person needed to pay custom duty and conversion charges to receive it. Once the amount was paid, they used to place some other demand for more money," the officer explained.

One of the three accused had entered India illegally via the Bangladesh border in December 2020. Since then, he had been residing in Greater Noida and was arrested from there, she said.

Police said 25 bank accounts created in different banks under different names for the purpose had been traced.

Approximately, ? 4 lakh in these bank accounts was frozen. Besides, ? 2.02 lakh cash, 15 mobile phones, 20 SIM cards, two laptops and four dongles have been recovered from the accused.