The text message was circulated at the venue of the party’s presidential primary, the Eagles Square. 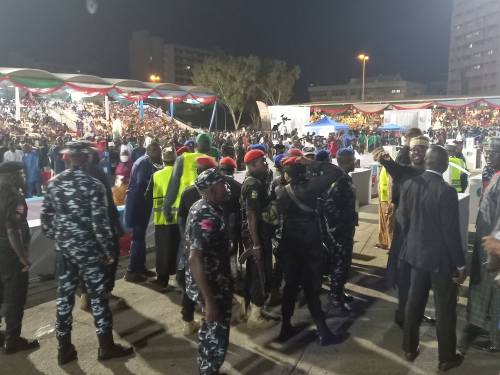 Bola Tinubu has reacted to a text-message circulating at the venue of All Progressives Congress national convention, saying that he endorsed a Muslim-Muslim ticket.
Tinubu is the National Leader and Presidential aspirant of the All Progressives Congress.
According to Tinubu, the text message being circulated at the venue of the party’s presidential primary, the Eagles Square is false.
Tinubu said the viral message is the handiwork of shameless, desperate, and misguided individuals.
The text message was denied in a statement released by Tinubu’s media office and posted on his verified Twitter handle.
The statement reads, “We have been informed of text messages aimed at APC delegates purportedly from Asiwaju Bola Ahmed Tinubu, other candidates and party officials making various false claims about Asiwaju and the primary process.
“We have been informed of a text message going around APC delegates at Eagles Square in Abuja purportedly from Asiwaju Bola Ahmed Tinubu claiming that with his imminent victory at the APC presidential primary and emergence as the party’s presidential candidate, the APC leader has now decided on a Muslim-Muslim ticket.
“This is nothing but a lie, it has no basis whatsoever.
“We enjoin the distinguished delegates to ignore this completely.
“The fake text message is a ploy by some undemocratic elements to confuse and hoodwink delegates sensing that Asiwaju Tinubu is comfortably coasting home to victory.
“There is no truth whatsoever in any of these messages. They are lies perpetrated by shameless, desperate and misguided individuals and should be ignored as such.”
Top Stories