Anene who lived in St Paul’s Bay before leaving for the UK, appeared in court on Wednesday after being arrested in Britain. 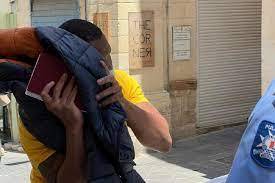 Johnson Anene, a 41-year-old Nigerian national, has been remanded in custody after being brought to Malta to face fraud and money laundering charges.

According to MaltaToday, Anene who lived in St Paul’s Bay before leaving for the UK, appeared in court on Wednesday after being arrested in Britain and transferred to the custody of the Maltese authorities on the strength of a European Arrest Warrant.

Anene who pleaded not guilty to the charges had been placed on the wanted list by the police in connection with the arraignment, last year, of several other individuals accused of playing a part in an online romance fraud scam.

One of the accused persons was former footballer Sunday Eboh.

According to the report, the group’s elderly victim had been duped into sending money to a person pretending to be a lonely American soldier deployed in Afghanistan. That case is still ongoing.

The court during Anene’s hearing was told that the ongoing investigations into the romance fraud scheme, being carried out by Paola district police, together with the Financial Crime Unit, had identified Anene.

Magistrate Rachel Montebello was told by Prosecuting lawyers Abigail Caruana Vella, Sean Xerri de Caro and Karl Muscat, together with Inspectors Claire Borg, Sarah Kathleen Zerafa to give an order that Anene’s assets should be frozen.

The court was informed by the defence counsel lawyer Rachel Tua that the extradition was not being contested and made a request for bail, emphasising the accused’s strong family ties to Malta.

The request was opposed by the prosecution, who argued that the investigation had revealed that Anene had fled Malta to escape prosecution for these crimes.

It was only recently that he had been arrested in the UK under the EAW issued by Malta and transferred into the custody of the Maltese police.

Meanwhile, the court did not uphold the bail request, ordering the man to be remanded in custody.