The duo welcomed their second child together last week and the naming ceremony was scheduled for Tuesday (today). 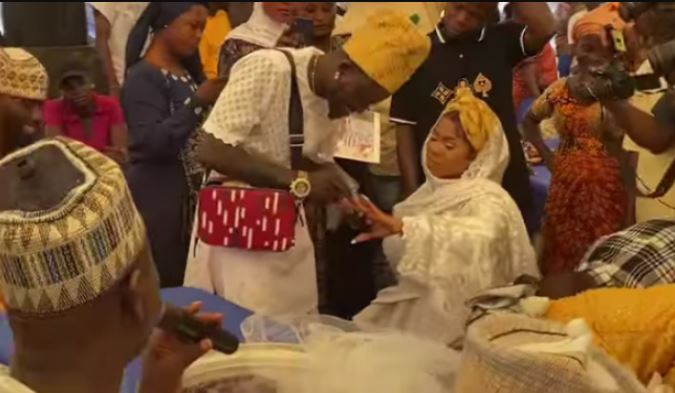 Nigeria's fast-rising singer, Portable, had a double celebration recently as he wedded his lover, Feranmi, during their child’s naming ceremony.

The duo welcomed their second child together last week and the naming ceremony was scheduled for Tuesday (today).

During the child’s christening, the couple in matching outfits, exchanged wedding bands in the presence of Islamic clerics, their families, and well wishers.

A video by GoldMyne TV captured the moment where Portable slid the ring on his lover’s finger and she reciprocated the action.

During the exchange of rings, the singer made it rain naira notes on his bride and mother of two of his kids.

The excited singer brought out bundles of naira notes from his bag and ‘sprayed’ them on his smiling bride.

The special day was, however, marred by tragedy as Portable’s aide hit a bike rider with the singer’s car, leading to the victim’s death.

In March, the singer and his lover announced that she was expecting a baby for him, as Feranmi displayed her baby bump.

The singer and Feranmi have earlier welcomed a son together, named Iyanuoluwa.

In January, the Zazoo Zeh crooner revealed that he has two sons from different mothers.

With the latest addition, Portable has become a father of three boys.