IPOB was reacting to Buhari’s latest comment in Rwanda that Kanu jumped bail, hence his release would be difficult. 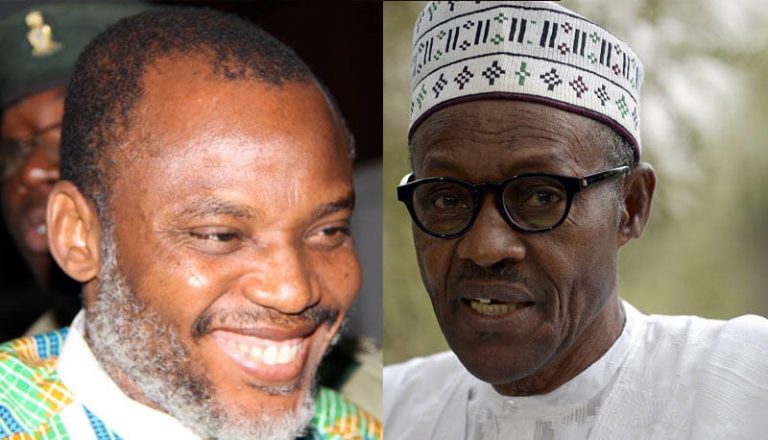 The Indigenous People of Biafra, IPOB has tackled President Muhammadu Buhari over a recent comment he made concerning leader of the group, Nnamdi Kanu.
The group called on Buhari to stop displaying their ignorance and hatred against Igbos.
IPOB was reacting to Buhari’s latest comment in Rwanda that Kanu jumped bail, hence his release would be difficult.
Emma Powerful, the spokesman of IPOB, urged the international community to monitor Buhari’s utterances.
Buhari had told the United Kingdom, UK, Prime Minister, Boris Johnson that Kanu must defend his rants against the Nigerian Government.
Condemning the president’s comment, Powerful said Buhari’s comment has shown interference in Kanu’s trial.
The president also urged the international communities to designate IPOB as a terrorist organisation.
A statement by Powerful titled: “Buhari and Presidency stop displaying their ignorance and hatred against Ndigbo to the public,” reads partly: “Also, the presidency always releases statements accusing and blaming IPOB of all manner of crimes both real and imagined. The latest of the intimidating tactics of the Nigerian government was the shameless and stupid accusation from the impostor in Aso Rock to the effect that IPOB is engaged in the destruction of oil pipelines across Nigeria and this again few days to Mazi Nnamdi Kanu’s court date.
“Is it not the same Buhari that said the government will not interfere in a subject matter before the court the one now making prejudicial statements to intimidate the Judge. The international community and Foreign Government should closely monitor the utterances from Nigeria’s Presidency which are obviously aimed at gravely interfering with the judicial process. Can Buhari be a Judge in his own court? Time shall tell.
“If this matter is further adjourned, Southeast politicians and elites need to be more cautious of their security, and possibly, they employ private/personal security because they may fall victim to these state-sponsored killings, aimed at intimidating the Court from releasing Mazi Nnamdi Kanu.
“Buhari is still making frivolous statements about Mazi Nnamdi Kanu accusing him of jumping bail in 2017 in far away Kigali Rwanda where the commonwealth head of governments meeting is holding. The UK prime minister Boris Johnson and other reputable world leaders should tell Buhari to stop interfering in Mazi Nnamdi KANU’s court case and stop intimidating judges handling IPOB matters.
“By openly shamelessly and wickedly lobbying the international community to designate IPOB a terror group while actively encouraging the mayhem, destruction and killings being perpetrated by Fulani terrorist Herdsmen, the Buhari Fulani government has betrayed and exposed its true agenda which is to destroy the only bulwark standing on the way of the Fulani agenda of total fulanization and islamization of Southern Nigeria and the Middle Belt of Nigeria.”
Top Stories