In a document released on Monday, June 27, the AIU added one additional year to Okagbare’s ban after she allegedly failed to respond to the charges by the extended deadline -June 21, 2022. 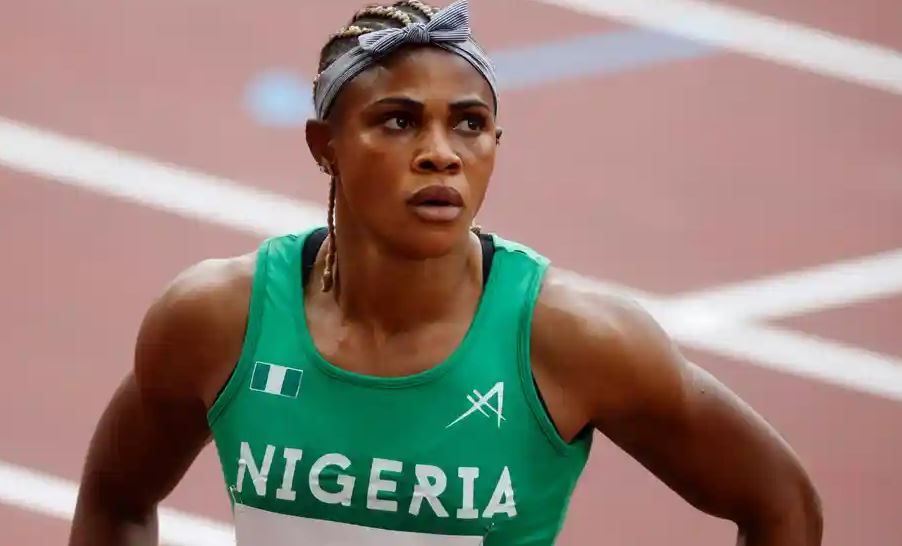 The 10-year ban placed on Nigeria’s 2008 long jump silver medalist, Blessing Okagbare has been extended to 11 years by the Athletics Integrity Unit.

In February 2022, a 10-year-ban was handed down to Okagbare by the body after she was found guilty of doping.

In a document released on Monday, June 27, the AIU added one additional year to Okagbare’s ban after she allegedly failed to respond to the charges by the extended deadline -June 21, 2022.

According to the document, the 33-year-old athlete is meant to have admitted the anti-doping rule violations (under Rule 2.3 and Rule 2.5 of the World Athletics Anti-Doping Rules) and to have accepted the consequences.

The 33-year-old, who is also a sprinter, was expelled from the Tokyo Olympics last year before the women’s 100m semi-finals after testing positive for human growth hormone at an out-of-competition test in Slovakia on July 19.

In February 2022, the Disciplinary Tribunal banned Okagbare for 10 years, consecutive five-year bans for the presence and use of multiple prohibited substances, and for her refusal to co-operate with the AIU’s investigation into her case.

The prohibited substances she tested positive for were human Growth Hormone (hGH) and recombinant erythropoietin (EPO).

The decision stemmed from charges that the AIU brought against Okagbare on October 7, 2021.

On June 10, 2022, the AIU further charged Okagbare with Evading Sample Collection, and Tampering or Attempted Tampering with the Doping Control process.

The charges related to the circumstances of the athlete’s whereabouts failure on June 13, 2021, and were pursued based on information in a criminal charge, brought against US-based “naturopathic” therapist Eric Lira, on 12 January, 2022, by the United States Department of Justice under the Rodchenkov Act.

Lira was alleged to have supplied performance-enhancing drugs to athletes before the Tokyo 2020 Olympic Games (delayed until summer 2021 because of the COVID-19 pandemic).

Part of the document read;

“On the basis that the Athlete is deemed to have admitted the anti-doping rule violations under Rule 2.3 ADR and Rule 2.5 ADR and accepted the consequences set out in the Second Charge, the AIU confirms by this decision the following consequences for the anti-doping rule violations: an increase of one (1) year to the period of Ineligibility of five (5) years already imposed upon the Athlete by the Tribunal in the Decision in accordance with Rule 10.4 ADR.

This decision constitutes the final decision of the AIU pursuant to Rule 8.5.6 ADR.

Further to Rule 13.2.3 ADR, the Athlete, the World Anti-Doping Agency (“WADA”) and the Nigerian National Anti-Doping Committee have a right of appeal against this decision to the Court of Arbitration for Sport in Lausanne, Switzerland, in accordance with the procedure set out at Rule 13.6.1 ADR.”

I Lost Confidence The Day I Met Messi At 2010 World Cup – Nigerian Footballer, Lukman Opens Up