Wilshere was once tipped as a future England captain during his time with Arsenal. 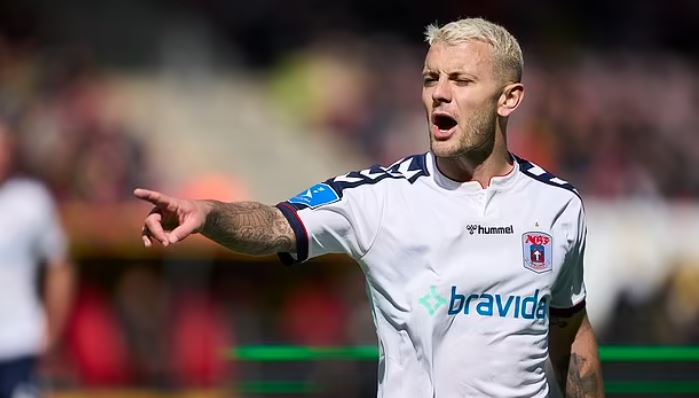 Former Arsenal star Jack Wilshere has retired from football at the age of 30.
He made the announcement in a lengthy post on his social media page.
His retirement follows his exit from Danish club, Aarhus.
Wilshere was once tipped as a future England captain, but despite his undoubted quality as a central midfielder and promising early progress, he struggled to shine at Arsenal after being hit by a number of injury problems.
He played 197 times for the Gunners, but in truth should have featured much more for a club he spent 10 professional seasons with having joined his beloved north London club at the age of nine.
At the start of this year Wilshere joined Danish Superliga side Aarhaus, but after he announced his exit from the club following just five months - fans feared the worst for him and sensed his footballing days could be dwindling.
In a lengthy statement on social media, Wilshere admitted his pain of watching his career 'slip away' and rued the 'difficult moments' he faced after leaving Arsenal and battling to show his talent at both Bournmouth and West Ham United.
Wilshere wrote: 'Today I am announcing my retirement from playing professional football. It has been an unbelievable journey filled with so many incredible moments and I feel privileged to have experienced all that I did during my career.
'From being the little boy kicking a ball around in the garden to captaining my beloved Arsenal and playing for my country at a World Cup. I have lived my dream.
'In truth it has been difficult to accept that my career has been slipping away in recent times due to reasons outside of my control whilst feeling that I have still had so much to give.
'Having played at the very highest level I have always held such huge ambitions within the game and if I am truthful I did not envisage being in this position at times.
'However, having had time to reflect and talk with those closest with me I know that now is the right time and despite the difficult moments I look back on my career with great pride at what I have achieved.
'Playing at the very highest level with some of the best players in the world, winning FA Cups, captaining my club and representing my country were beyond my wildest dreams when I was a small boy growing up in Hitchin. I feel very fortunate to have had the career I've had but none of it would have been possible if it wasn't for the love and support of so many people.
'Words will never do justice to the love and thanks I have for the Boss, Arsene, Pat Rice and Boro Primorac. Without your belief, support and guidance from the very first day we met I wouldn't have been able to become part of the Arsenal family. I'm forever grateful to you all.
'A huge thank you to the board, management and everyone else connected with Arsenal FC. Having joined the club at the age of 7 years old you've become my extended family and thank you for everything.
'To the best supporters on the planet, all of you Arsenal fans, thank you all from the bottom of my heart. To play for you all has been a privilege. You've always made me feel supported and I hope I did you proud representing your club. I'll never forget how you always backed me and I'll forever be a Gooner.
'Lastly but most importantly, to my wife and children. Words simply can't express what your love and unconditional support means to me. You've shared my highs and my lows and never wavered in your love and support for me.
'Through the dark times you were the reasons I got out of bed and kept going. Andriani, thank you and I love you so much. You're my rock and together we make a great team. To Archie, Delilah, Sienna and Jack, I hope I have made you proud because you are all that matter. I love you all so much and thank you for always making me smile.
'I have enjoyed every moment of my career and it has been the journey of a lifetime. Now is the right time to close this chapter but I still have so much to give to the game and I am excited about what the future holds. COYG, Jack.'
Top Stories