The value of the Jacob & Co. Astronomia Sky White Diamond 18-piece Limited edition worn by Uzodinma is allegedly worth $785,496 which is equivalent to N455 million at $580 per dollar. 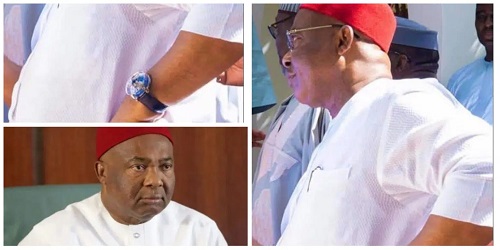 The Governor of Imo State Governor, Hope Uzodinma has been lambasted on social media after he was seen wearing a designer wristwatch reportedly worth four hundred and fifty-five million Naira.
According to reports, the Jacob & Co. Astronomia Sky White Diamond 18-piece Limited edition worn by Uzodinma is allegedly worth $785,496 which is equivalent to N455 million at $580 per dollar.
An architect and building engineer, Adeola Olutayo, who spoke with SaharaReporters, said N5 to N6 million can build a block of six classrooms in Nigeria, excluding the price of land, which is lacking in Imo State. 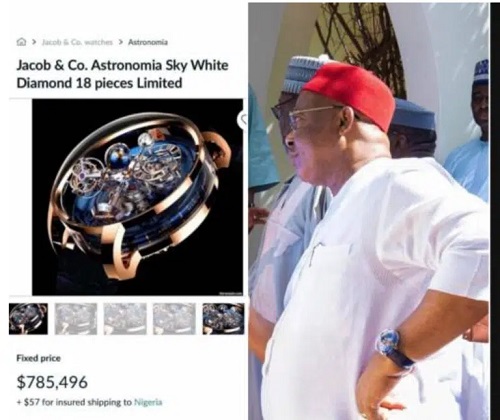 This stirred angry reactions from many social media users, who stated that there are numerous abandoned projects and bad roads in Imo State.
maduka_lizzy wrote: “Imo state road is the worst road in Nigeria……. Very b##d road. Na canoe we dey take swim”
ngozi4858 wrote: “They never cared for the masses, except 1de_rica of rice hmmm”
iammercilove wrote: “Abandoned projects every where. Honestly we are suffering in imo state”
iamdx2 wrote: “Governor way dey spend like #Ronaldo”
fladygold wrote: “Nothing is funny here and I can’t still see people laughing may God heal our land and give us the wisdom to vote wisely this coming election”
slim_zannie wrote: “Yeyebrities and polithiefcians are the main problem of Nigeria”
meetheritage wrote: “Omo, Nigerians don suffer one person carry wrist watch of 455m for hand”
Top Stories