Ngonadi described the marked buildings as illegal constructions with no extant approval from the state government. 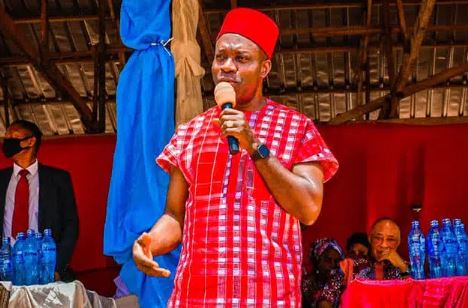 The Anambra State Government has announced it will be demolishing more than 1,000 shops at the Ochanja Market, Onitsha.
According to Punch, the governor, Prof. Chukwuma Soludo, represented by the Commissioner for Commerce and Industry, Dr Obinna Ngonadi, led a joint task force and building professionals to monitor various sections of the market on Friday.
Ngonadi described the marked buildings as illegal constructions with no extant approval from the state government.
It  was also gathered that most of the buildings had structural defaults, including cracked walls and decking, falling pillars and sands, road obstructions, among other challenges.
He added that the current administration had the intention to decongest markets by making them inhabitable according to international standards.
He warned owners of illegal structures to quickly remove them or get ready to pay the state government for removing it.
Also speaking, the Chairman, Anambra State Physical Planning Board, Mr Chike Maduekwe, assured that Anambra State Materials Testing Laboratory would visit all the markets to test the structural integrity of their buildings so as to find out those to be spared with some amendment and those to be completely demolished.
Speaking on the side-lines, the Caretaker Committee Chairman, Ochanja market, Mr Bonaventure Muo, hailed the governor for the move, assuring that they would continue to support government programmes to sanitise the markets.
The team later visited Building Materials Market at Ogidi and Ogbunike to assess their level of compliance to the traders/markets enumeration exercise, and hailed traders for complying to the government orders.
Addressing the traders, the commissioner said the state government, through the data capturing exercise, would gather comprehensive data of all traders and their enterprises with a view to taken proper care of their welfare, security and other purposes.
Speaking in separate interviews, the Chairman of the Building Materials Market (Ogidi), Mr Jude Okonkwo and Mr Adinu Onyechi of Building Materials 2 and 3 (Ogidi and Ogbunike), commended the governor for the move, which they promised to mobilise all their members to participate actively as it was in their good interest.
Top Stories