Following the news, Portable is currently trending as many dragged him for betraying Davido who helped pushed him to the limelight. 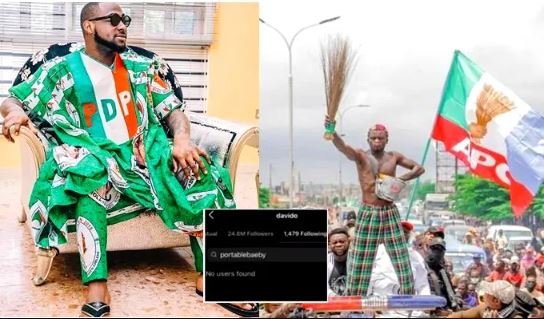 Following the emergence of Ademola Adeleke as the winner of the Osun governorship election, fans of Nigerian singer, Davido, have attacked his colleague, Portable.

Davido's fans are not taking it likely with controversial hip-hop artiste, Habeeb Okikiola popularly known as Portable who declared his support for the incumbent governor of the state, Gboyega Oyetola.

Portable had a few days ago before the election, joined the All Progressives Congress, APC, to campaign for Oyetola in Osun state and on all social media platforms, stating that he was paid by the ruling party to do so.

Doing the APC bidding, Portable released a video on Instagram where he was with Oyetola declaring support for him.

While it appeared like moral support for Davido to pitch for Adeleke in his political ventures, Portable sees his own adventure as a way of making money and doubling his hustle as the slang always goes.

However, Senator Ademola Adeleke, has been declared the winner of the Osun governorship held on Saturday, July 16, 2022.

Following the news, Portable is currently trending as many dragged him for betraying Davido who helped pushed him to the limelight.

ronkeyzee: Make Portable sweep the whole of Osun with broom before going back to Lagos

mide_fwesh: What will Portable beg for again now APC lost to PDP lmao. In this life make we get sense and also lastly no be everything be gra gra!!

misschide: Portable will not like this ooo. So y’all he ready for war